Kick Ass arrives in theaters April 16 as not your usual comic book movie by a long shot. The goal of the Kick Ass filmmakers was to make a universal movie that resonated with all audiences.

Results are a film that seeks to appeal not just to comic book fans with its colorful and heroic characters, but also adult women and their men with its story of overcoming the odds in the face of life’s challenges while also standing up for what is right.

SheKnows is proud to present the exclusive online premiere of a 30-second spot entitled Hot Heroes. Our premiere Kick Ass clip features a look at how one woman in the film finds the city’s new superhero a little hot. 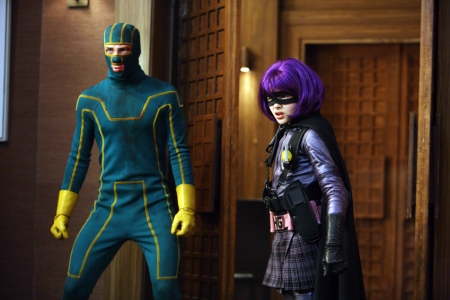 In Kick Ass, Dave Lizewski (Aaron Johnson) decides that is exactly what he and his friends need to do as he becomes the vigilante Kick Ass. Of course, Dave learns early that the pain of being a super hero is exactly that — the pain!

Although his super hero outfit is top notch, his inexperience in fighting crime is obvious to those who wish to do the city evil, namely the local Mafia. Dave picks up help in the form of the dad-daughter superhero tandem of Big Daddy and Hit Girl and set to take down the evil Mafia boss, Frank D’Amico (Mark Strong).

Thanks Lionsgate! Here’s your Hot Heroes: