UNHCR Goodwill Ambassador Angelina Jolie took a break from filming The Tourist across Europe with Johnny Depp to visit refugees in Bosnia and Herzegovina on April 5. Jolie brought hubby Brad Pitt along for the experience. Making quick hit visits to areas ravaged by the Balkan civil war, Jolie hopes to spread awareness about the ongoing plight of 113,000 displaced Bosnians and 7,000 Croatian refugees.

The Balkan war waged from 1992 to 1995 and left over 2.2 million displaced, destroying the land and the hearts of the people of former Yugoslavia. Although over 2.2 million people fled the violence, only over a million have been able to return — conditions in the war-torn areas remain heartbreaking. 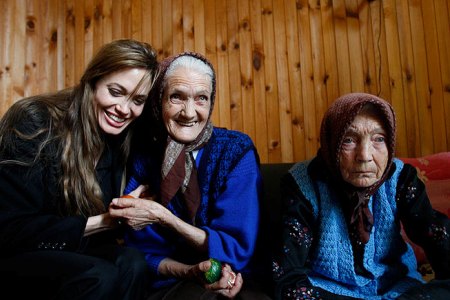 Jolie took a quick break from shooting The Tourist on Easter Sunday so she could meet with refugees in the rundown collective centers of Gorazde and Rogatica. Jolie also chatted with two families in a ravaged village near Visegrad.

Pitt and Jolie travelled together, but did split up for a bit while Pitt met with local Bosnian men, while Jolie connected with the local women. While the conditions felt hopeless, and locals shared stories of abuse, rape and torture — Jolie was moved by the strength of those she encountered.

“Despite the grim realities of their unsettled existence, they have an incredible determination to make a better future for their children,” Jolie told the UN Refugee Agency.

Jolie also met with UNHCR to discuss proposals to help resolve the situation of those still displaced over a decade and a half after the war. “I cannot overemphasize the need to focus on the wellbeing of the most vulnerable individuals of the population,” Jolie said. “By ending displacement and ensuring quality of life, we can help to promote progress and long-term stability.”

Having ducked out from filming with Johnny Depp to make this visit, Jolie was forced to cut things short and get back to her day job on the set of The Tourist.

Word is she hopes, “to return to this beautiful country soon and meet with political representatives to further discuss the solutions that are so badly required.”

You can read more about her visit on the UNHCR website.