Desperate Housewives is pure primetime soap, but during its first seasons, it was as famous for its behind the scene dramas as the action on Wisteria Lane. After a bit of a lull, it’s time for another cat fight. Nicollette Sheridan is suing creator Marc Cherry for assault and battery, gender violence, wrongful termination and four more charges! 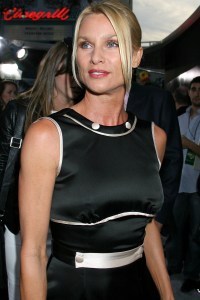 Sheridan’s character Edie was killed off last February and according to legal papers referenced by TMZ, Sheridan is claiming over $20 in damages in a lawsuit that names both Cherry and the Desperate Housewives network, ABC.

The story is that Cherry created a hostile work environment, “behaving in an extremely abusive and aggressive manner toward the individuals who work on the show.”

The suit further charges that when Sheridan questioned the headwriter about script issues back in 2008, “Cherry took her aside and forcefully hit her with his hand across her face and head” and then followed up by begging for forgiveness.

It also alleges that Sheridan shared her complaints with ABC and that when costar Teri Hatcher (Susan) went to the higher ups about Cherry, he told Sheridan, “I hope Teri Hatcher gets hit by a car and dies.”

Overall, the suit charges the openly gay scribe and the network with a list of legal indiscretions, including wrongful termination, assault and battery, gender violence, discrimination based on sex, sexual orientation and age and intentional infliction of emotional distress.

Cherry hasn’t responded to the complaint, but ABC Studios spoke out in a statement today, saying, “While we have yet to see the actual complaint, we investigated similar claims made by Ms. Sheridan last year and found them to be without merit.”

While many have shrugged the suit off as sour grapes, E! online is quoting a source who confirms Cherry “has a crazy temper and is often not logical. He feels he doesn’t have to answer to anyone.”

This is certainly juicier than any of the action on Whisteria Lane of late, so SheKnows will keep you posted on this ongoing storyline!

read on for more desperate housewives