This video of Kate Gosselin “dancing” in full-on hooker makeup and tranny pirate garb will make you laugh and cry and puke all at the same time. Watch as she attempts to do the Paso Doble to Lady Gaga’s Paparazzi on last night’s episode of Dancing With the Stars. Trust us. You will not be disappointed. 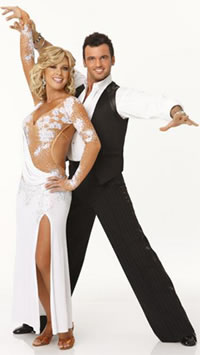 Kate Gosselin is good at some things — like, for instance, emasculating men and making a killer batch of Monkey Munch. But dancing? Oh, hell no.

After several weeks of attempting to hoof it on the dance floor for ABC’s Dancing With the Stars, she made her debut as a Western tranny hooker and danced the Paso Doble to Lady Gaga’s Paparazzi on the April 5 episode. “That song speaks directly to me, because every day I walk outside my door, and the paparazzi follows me,” she said.

Oh, you poor thing. It must be soooo difficult leaving your eight children to get $7,000 haircuts and gratuitously touch a hot, buff deliciously tan man. Boo hoo [puke].

The judges did, however, compliment her by saying she resembled a “super bitch from hell” in her costume. Wait… was that a costume? Watch this and enjoy the trainwreck. (One word, Kate: “Grace.”)