Glee is returning on April 13 at 9:28 pm with Broadway stars Idina Menzel and Jonathan Groff — but some Glee fans can get a sneak peak on April 10. 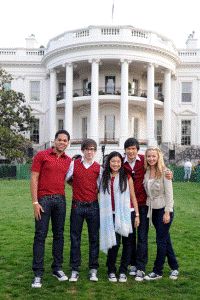 When fans catch up with New Directions next Tuesday on the Spring premiere, the Glee crew is still spinning from their big win at Sectionals and with Regionals on the way, there’s no time to waste!

They put their hyped energy toward new numbers and first up is The Beatles’ Hello, Goodbye, but the crew better watch their backs. Sue Sylvester (Jane Lynch) is back too and she returns from Boca with a renewed commitment to destroying Will (Matthew Morrison) and the Glee Club.

Meanwhile, some internal drama may do the work for her! The entire club takes a hit when Rachel’s (Lea Michele) devoted eye strays from Finn (Cory Monteith) to one of their competitors, Jesse (Groff) from Vocal Adrenaline. Suspicious of Jesse’s motives, everyone’s favorite teacher pays a visit to VA’s coach, Shelby Corcoran, (Menzel) to do some investigating.

Will also has some internal investigation to do. He’s newly single and after that finale kiss, will he take it to the next level with Emma (Jayma Mays)?

In anticipation of the premiere, there’s tons of GLEEk action going on.
Promos for the premiere have already hit the Fox site, there’s fun planned for the Glee Facebook page and MySpace page, and on Wednesday, GLEEks can go to Fox to get into the photo booth with their favorite characters.

On Wednesday, April 7, the cast of Glee will be on The Oprah Winfrey Show for a fun-filled hour of behind-the-scenes secrets, revealing interviews, unseen backstage moments and a show-stopping performance.

Then on Saturday, there will be preview screenings around the country! LA locals can catch a outdoor screening at the Grove and other markets are set to be announced.

There’s also a nationwide online casting search going on. The show is looking for fresh, young, talented performers for the second season. Amateur and professional between 16 and 26 can submit an audition video exclusively on MySpace at myspace.com/gleeauditions through April 26.