Tiger Woods returns to golf today at the Masters which is his first appearance back on the golf course doing what he does best. This morning at 8 am EST, Woods began practicing at the Augusta National Golf Club. 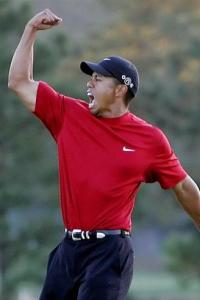 In addition to stepping foot back onto the public arena of the golf course, sans paparazzi and speculation, Woods is scheduled to participate in a news conference today at 2 pm ET.

The Thanksgiving Day wreck occurred days after the tabloid National Enquirer alleged Woods was having an affair with a New York nightclub hostess. The woman has denied the allegation, but over a dozen others have come forward since.

It will be interesting to see how one of the most successful professional golfers in history deals with his focus being back on the golf course after the transgression scandals wreaked havoc on his marriage and his life.

You may recall Woods’ famous press conference in February where he did not answer questions from the press but rather read from a carefully calculated statement.

Woods indicated he was participating in inpatient therapy for 45 days to deal with “issues.” As various sponsors suspended or dropped their relationship with Woods, he also apologized to his business partners for his poor judgment and behavior.

Most recently, another apology has been requested upon the golfer as his kindergarten teacher demanded an apology based on his allegations that she ignored a racial attack when he was five years old.

Setting all of these distractions aside may be one of the most difficult mental challenges Woods will face. According to David Dusek, deputy editor at Golf.com, “The mental challenge that is facing Tiger Woods as he returns to Augusta National and then afterwards at other PGA Tour events, we can assume, later on in the 2010 season, is probably something that no other golfer has ever faced before.”

Since Woods’ decided to return to the Masters to make his grand re-entrance into the sport, it may bode well as this particular tournament keeps a tight hold upon spectators and the media. As a four-time champion of this tournament, Tiger is golfing on familiar territory and only wanted to return to the game at a time when he feels he can win.

Stay with SheKnows Entertainment for our full report of Woods’ press conference at 2 pm.