Dr Conrad Murray will claim in court that Michael Jackson administered a deadly dose of Propofol himself. 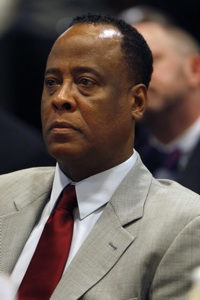 The doc, who was with Jackson when he died and is being charged with manslaughter, will defend himself against the accusations with the idea that Jackson self-administered the fatal dose of the powerful anesthetic.

Here’s how Murray will report it went down:

Murray gave Jackson a small dose of Propofol at 10:50 am, which, combined with the Ativan and Versed Jackson had already taken, put the pop star to sleep. Murray stayed in the room for an hour, talking on the phone — he claims Jackson liked to sleep in a room with activity — and at noon left the room for only about two minutes.

Murray believes Jackson suddenly awakened during that time and self-injected the remaining Propofol through the IV, causing the massive overdose that led to cardiac arrest. The doc will use a key piece of evidence to prove his point: The fact that the empty bottle of Propofol was found underneath the nightstand next to the bed. Murray will say that if he’d administered the deadly dose, he would have removed and hidden the extra bottle.

Conrad said that, when he came back, Jackson was lying with his eyes open and pupils dilated.

Murray did not tell EMTs or ER staff that he gave Jackson Propofol. According to Jackson’s bodyguard, Alberto Alvarez, Murray stopped CPR to hide the drug bottles.