Anna Paquin puncuated quite a week in Hollywood with her deeply personal announcement. Merely days after Grammy award-winner Ricky Martin came out, the True Blood star made headlines by announcing: Paquin’s bi-sexual. 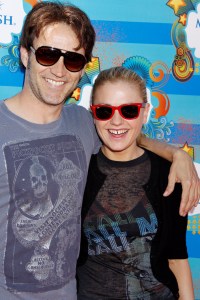 Unlike the “Google Topeka” April Fool’s Day joke, Anna Paquin’s big April 1 reveal was anything but a joke.

As stars come out in their own way, she punctuated the statement by coming out via a public service announcement for the Give a Damn campaign which promotes equality for members of the LGBT community.

Paquin’s True Blood co-star and fiance, Stephen Moyer, are currently filming the third season of their popular show on HBO. The True Blood premiere is scheduled for Sunday, June 13 at 9 pm. The upcoming season will follow the plot of the vampire mystery novel, Club Dead.

According to EW.com, Alan Ball hinted about a few storylines audiences can expect in the next season.

As to why Jason fell for Maryann’s influence while Sookie did not, Ball noted, “They have the same parents. We will find out what Sookie is [next season]. There are such things as dominant and recessive genes. Maybe Jason is fundamentally human but he has a trace of some non-human stuff. He’s kind of a ridiculously perfect [human being]. He’s athletic and has that charisma thing, so maybe he had some help in that regard. [Laughs] Ultimately, if you look at percentages, he’s mostly human. Sookie has a stronger genetic predisposition in another direction. People who have read the books know exactly what I’m talking about. People who haven’t, it will be revealed.”

Read on for more anna paquin and true blood