Celtic Woman could stake its claim as one of the biggest bands in the world. After less than a decade together, the singing angels from Ireland have the world on a string after selling millions of records and currently selling out on their tenth US tour.

Celtic Woman is singers Lisa Kelly, Chloe Agnew, Lynn Hilary, Alex Sharpe and fiddle-player Mairead and their latest CD and DVD (of the live show), Songs from the Heart, is for the more romantic of their fans. Considering Celtic Woman has literally always sung from the heart, the entire Celtic nation has emphatically embraced their latest effort. 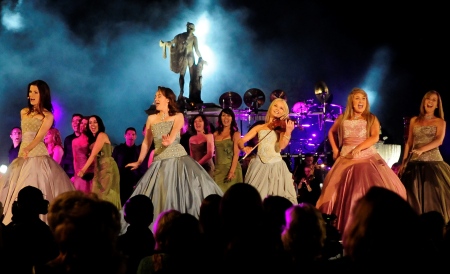 The group has had four concerts aired on US PBS stations close to 14,000 times. Flipping channels in the next few months, don’t be surprised to witness Songs from the Heart.

The DVD version of the conert recorded at Powerscourt House and Gardens is equally as powerful as the CD, but with the visual element of the live Celtic Woman experience coupled alongside today’s home video sonic succulence, the Irish lasses are priceless in the live concert DVD setting.

Singer Lisa Kelly joins SheKnows for an exclusive chat about the group, their latest album, DVD and tour as well as how being a mother of two has only enhanced her singing and her professional success. 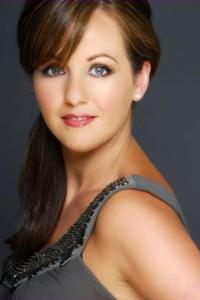 SheKnows: Thanks for visiting with SheKnows.

Lisa Kelly: Not at all.

SheKnows: Do you have a favorite track on Songs from the Heart?

Lisa Kelly: I love Amazing Grace. It’s a song I’m never, ever tired of hearing. I used to love it. I used to sing at funerals at home, before I was doing this, and it was always a song that I would hope people would pick. It’s one of those very emotion-evoking kinds of songs; everybody has a special attachment to it and everybody knows it. I’ve actually heard a bad version of it either. It’s just one of those songs that everybody sings in their own way which I think is very special.

SheKnows: And, this may be the same one, but is there a favorite song off that record that is a favorite for you to perform live?

Lisa Kelly: Oh yeah, I’m loving The Moon’s a Harsh Mistress at the moment. Just for me, I’m loving that song at the moment. It’s a really nice song, written in a really nice key and David’s done some wonderful stuff with it. I enjoy, even when I’m doing a solo, I like when Mairead is there playing and I love singing along with the piano; having Brian on playing the piano and Mairead beside me is definitely a highlight for me throughout the show. 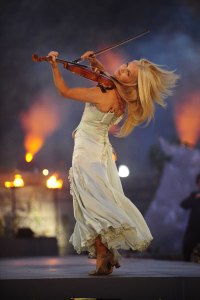 SheKnows: Of all the concert halls across the globe, is there one that stands out for you, kind of a monumental moment?

Lisa Kelly: We were very lucky. The first year we played Carnegie Hall in New York which was very special for all of us, but I think for me I was really excited to play Radio City. I’d seen a lot of shows there, I’d seen The Rockettes there, it was just something I had always wanted to do so that was a huge plus for me. We’ve been so fortunate, I mean we’ve played Red Rock in Colorado which is on a total different scale then Radio City, but it’s always the highlight of the tour when we get to play those two particular venues. And then you go around and we’re lucky that our show can be played in both arenas and theaters. We get to perform in arenas which is a very different concept and it always feels like it’s a different show in an arena, and then you go back to the likes of Detroit and you play in the beautiful Fox Theater. I love theaters, but I love arenas just as much so it’s kind of hard, but definitely Red Rock and Radio City are stand outs for me.

SheKnows: All these places you’re mentioning, even Fox Theater, they all have such history.

Lisa Kelly: They do. It’s so wonderful and it’s lovely to be in the arena because we do a show every single night. So if you were to be doing theaters all the time, it’s not that you would get tired of it, but it’s just nice to sort of shake it up a little because it can be different in an arena where it’s cold usually, your ears are ice, and there’s a different feel; there’s a different acoustic as well in an arena, but it is always nice to get back into a theater and to have that little bit of history and to go play in some of them.

Up next…Lisa lets SheKnows into how her life came to include crossing the globe as an ambassador of musical and cultural Ireland.