Lindsay Lohan has been at the center of a few Hollywood feuds over the years. Lohan’s latest tirade was launched against talk show host and general funnyman, George Lopez. 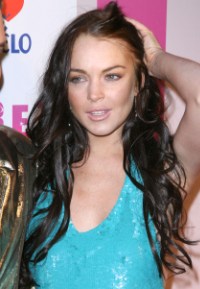 Lopez had a bit on his George Lopez Tonight TBS talker about a suspicious-looking white powder spilling out from Lohan’s shoes as she left a Hollywood hot spot last week.

The late-night host made a joke that the substance was cocaine and that Lohan should be a little more careful with her consumption.

Immediately Lohan fired off a response via Twitter. Really, how else does anyone respond/apologize/announce anything these days!

“Thanks for the childish comment regarding baby powder in my shoes to loosen up the leather,” Lohan said on Twitter March 30.”Don’t you have kids? Wouldn’t wanna hear that about them, or would you? Act like a grown man, have some respect and dignity for yourself.”

Not too shy to fight back, Lopez (who possesses one of TV’s greatest sense of humors in this reporter’s opinion) took to Twitter himself to defend the joke.

“Let’s take this off Twitter, come on the show. You want me to stop talking about you I will,” Lopez posted. “Come and tell me, to my face.”

“To my face” sounds like a serious, old-school Hollywood grudge match throw-down!

One winner in all of this feuding is Lohan keeping her ever-fading name in the news. Although Lopez’s show is doing OK in the ratings, there is no such thing as bad publicity in terms of a celebrity feud when it comes to shooting up those viewers. Something tells us that if Lohan were to visit Lopez’s set, it would serve as his highest rated show of all time.