Erykah Badu’s uncut video is causing a stir. Badu dropped her new album New Amerykah Part 2: Return of the Ankh on March 30, but she’s getting attention for dropping her clothes in her political video for the track Window Seat. 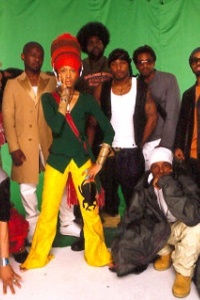 The much talked about track has the singer-songwriter’s typically languid sound. The video in which she walks naked through Dallas’ infamous Dealey Plaza and is shot right next to where President Kennedy was assassinated is raising some controversy.

The Window Seat uncut video starts with a radio report of Kennedy’s final ride, before the assassination and having shunned her oversized afro and head wraps, Badu strips off her clothes as she walks the streets. Most folks don’t even seem to notice as she moves move through them naked, the word “Evolving” across her back.

Then a shot rings out, the queen goes down and her own voiceover says:

“They who play it safe are quick to assassinate what they do not understand. They move in packs, ingesting more and more fear with every act of hate on one another. They feel most comfortable in groups. Less guilt to swallow. They are us. This is what we havve become. Afraid to respect an individual. A single person or event or circumstance can move one to change, to love ourself, to evolve.”

There’s been a mild uproar over the guerilla shoot, especially as there were kids in the infamous square when Badu got naked. Word is Badu’s director was even prepared to post bail if the shoot got her arrested, since it isn’t legal to stroll naked in the streets of Dallas, but the preparation was moot, since Badu wasn’t caught in the act.

Badu’s music is known as much for its soulful sound as its personal, philosophical, and political content and the singer-songwriter seems to live within her musical scene.

One of her best songs, Love of My Life (An Ode to Hip-Hop), which hit number nine on the pop charts, topped the R&B listings and earned her a Grammy, was born out of her two year romance with Common.

What more, while she’s collaborated musically with many, including Soulquarians Quest Love of The Roots, Common, Talib Kweli, Mos Def and Q-Tip; the mom of three also shares children with Andre 3000 of OutKast, West Coast rapper The DOC and her current beau, rapper Jay Electronica.

While some might take flack for this type of dating record, Badu is beloved by fan and music colleagues, alike. With four Grammys to her name so far, she’s received musical acclaim for her stylings since her first album, Baduizm, debuted at number two in 1997 and went on to find success with Live (2007), Mama’s Gun (2000), Worldwide Underground (2003), New Amerykah Part One (4th World War).

Her newest venture, New Amerykah Part Two (Return of the Ankh), came out March 30 and is touted as being less political than its predecessor. While the themes may be love and relationship, however, the controversial new video clearly shows she has no plan to stop getting political.