Robert Downey Jr and Jude Law star in Sherlock Holmes, out on Blu-ray and DVD combo pack on March 30. The duo portray Sherlock Holmes and Dr Watson. Although initially, some thought the casting should have been reversed. Witnessing Law and Downey actually work their magic upon seeing the finished Guy Ritchie product immediately silenced skeptics. 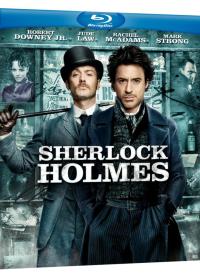 Ritchie takes audiences into 19th century London where Holmes and his trusty sidekick Watson are constant in their pursuit of justice.

In Richie’s Sherlock Holmes, the great detective has never been challenged as the case that now lies in front of him. London is gripped with fear after a series of grisly murders. As the killer is caught in the act of his latest crime by Holmes and Watson, the murderer — Lord Blackwood — promises his hanging won’t be the end of the killings.

Downey and Law shine as the crime-fighting duo. But, what is the most striking element of Sherlock Holmes’ mastery is how a classic story has found a modern auteur at the right time in history to produce a new classic that reinvents the old.

After Ritchie’s directing rock star work in RocknRolla and Snatch, not to mention the cult hit Lock, Stock and Two Smoking Barrells, it is easy to see why the former Mr Madonna wanted to take his filmmaking prowess to new heights — a full fledged high budget Hollywood blockbuster. What he achieves in Sherlock Holmes is the right amount of riveting Ritchie tension with a dash of Downey’s patented humor and Law’s stoic grace. It is a match made in movie heaven.

Having the Blu-ray DVD combo pack of Sherlock Holmes is probably the best move. Whether some like it or not, Blu-ray is the wave of the home video future and in this challenging economy, a new Blu-ray may be out of reach. But, it is nice to know that whenever the upgrade is made, and it will be made, a Blu-ray upgrade of a family favorite is already in the house.

Sherlock Holmes is also available as a DVD only and On Demand through digital cable outlets across the country.

Read on for more Sherlock Holmes