Custody battles can get ugly, but in tonight’s episode of Law & Order, things get so bad both parents could end up in prison. Law & Order has moved to Monday nights after the Leno disaster. While the hit show hasn’t been able to beat out the competition yet, Law & Order continues to deliver with controversial storytelling and stellar guest stars. Evidence of that is the March 29 episode! 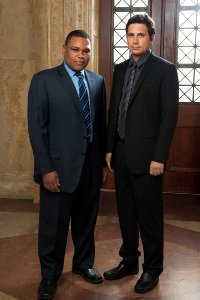 When a global warming specialist is poisoned, Detectives Lupo (Jeremy Sisto) and Bernard (Anthony Anderson) suspect the competition, but it turns out science has nothing to do with it.

The scientist, Dr Oscar Silva, is entangled in a custody battle, thanks to his wife and her ex-husband, Phillip, played by guest stars Tammy Blanchard and Tony Hale.

Mrs Silva absconded with their daughter, moving to Brazil and leaving daddy furious. Even worse, the daughter in question is afraid of her real father and as tempers flare and the story unfolds, it seems both parents could end up in prison.

There’s likely more to this Law & Order story, however, and while the detectives begin to investigate the family drama, it’s no surprise it become personal for one of the team.

As with most viewers, ADA Cutter (Linus Roache) has an emotional connection to the hot button issue and the case stirs up unpleasant memories.

The show that set off the Law & Order franchise is still finding its footing after taking over Monday’s 10 pm slot after NBC’s Leno shakedown. Tonight, it will struggle to beat out the second half of the explosive Castle two-parter, after coming in with less than half the viewers Castle brought in last week. Luckily, CSI: Miami shouldn’t pose much competition, with a repeat episode scheduled.