Want to learn how to slay a box office hit? How to Train Your Dragon breathed life into the box office report by soaring into first place during its weekend debut. Distributed by Paramount, the DreamWorks Animation 3D flick opened with $43.3 million.

How to Train Your Dragon stars the voices of Jay Baruchel and America Ferrera, the tale of a Viking kid who befriends a ferocious dragon resonated with theatergoers. Gerard Butler also lends his voice to the flick and was competing against his other movie in another demographic, The Bounty Hunter.

Disney’s Alice in Wonderland slipped to second place with $17.3 million. It’s still doing incredibly well as its worldwide receipts are currently approximately $656 million. Although the past three weeks, Burton’s Alice in Wonderland flick was holding strong at first place, this is the first weekend it was moved to the second spot. 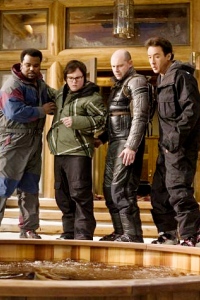 Theater goers haven’t gotten their fill of Jennifer Aniston and Gerard Butler just yet as The Bounty Hunter sailed into fourth place with receipts of $12.4 million. Although Diary of a Wimpy Kid holds strong in fifth place, so does the Paramount flick, She’s Out of My League. League stars Jay Baruchel and Alice Eve, who was cast in the Sex and the City sequel as Charlotte’s nanny.

Read on for more How to Train Your Dragon