Jamie Oliver started a food revolution in the UK, and now he’s bringing his food fight to the US with ABC’s Jamie Oliver’s Food Revolution. America is in the fight for its collective life with an obesity epidemic, and Oliver was on the front lines when he spent three months in Huntington, West Virginia. The community had been cited as one of the unhealthiest cities in America, and Oliver sought to spark a Food Revolution. 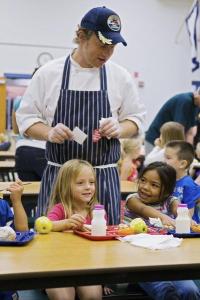 Oliver is the UK television chef with a penchant for creating dishes that are naturally nutritious and always delicious.

Oliver hopes to set off a chain reaction of healthy eating for America’s children and their parents.

Oliver sat down with SheKnows just before heading off to talk to Larry King and Oprah Winfrey.

SheKnows: You started this in the UK. What inspired you in general to start a Food Revolution?

Jamie Oliver: Because of the platform that I work on, I thought it was my job, really. I do TV and I love working with food in many different ways. I have a way to impact so many people. If you talk about it, people listen to it. Then things start to change a bit. Then I started thinking, “All right, maybe I should keep doing that.” I don’t know. I fell into it, really. As far as America’s concerned, I’ve worked here for 12 years; it’s been a pleasure. I’d be mad to not want to do my job here. It’s not about being English or American. It’s about being human. I do generally believe it’s not even the little things. There’s a lot of stupid things allowed to happen that have got to stop. Hopefully, this show picks up on that. Over the next couple of shows, you get an idea of how big it is, really. 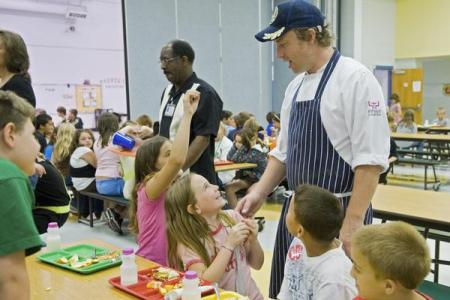 SheKnows: Did you find a difference between America and the UK? Were the problems synonymous?

Jamie Oliver: They are absolutely the same. Not much different at all. Everything I’ve seen in West Virginia or other parts of the States, I’ve seen in my own country. Probably the only real difference is that the general problem with portion control is a little worse here than it is back home. The sheer amount of processed food seems to be a lot worse. Apart from that, all the issues are the same. Also, the good thing about working over here on this project is I have seven years of hindsight.

SheKnows: As a celebrity chef accustomed to making amazing dishes, could you offer a few tips for busy families to ensure their children are eating healthy? 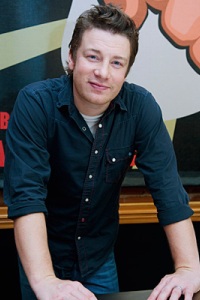 There are things that you can do that are cheap and quick. We’ve done “Feed Your Family for a Fiver” kind of stuff — a proper, healthy meal for five pounds, like eight dollars, that will feed four or five people. If budget is not as much an issue and it’s about speed, there are delicious 20-minute meals. Here’s the thing: You should know 10 meals to save your life. If you know how to make a basic stew, basic stir fry, pasta sauce and how to make veggies and salad taste decent — if you’ve got those 10 basic principles down — then you’re in a place where you can do a 20-minute meal and you can feed a family of five. When you can’t cook at all, you don’t have many choices.

SheKnows: We’re dealing with a whole generation of parents who didn’t pay much attention to what they ate. How do you see motivating the parents to change? They’re the ones who feed the children and will be the agents of change.

Jamie Oliver: I think, actually, this could be the first generation where the kids teach the parents.

Jamie Oliver: To be honest, the parents are the second generation of three that, on average, didn’t learn to cook at home or at school. In the last 60 years, only 12 percent of women worked; now, over 60 percent do. It’s really hard for mums now. There’s a lot of guilt out there. Mums deserve to have their kids fed properly in school. And, I think the parents of America deserve to have their kids learn some basic food awareness — not just in the dining hall, but out in the world. At the same time, every child that leaves high school should have to learn those 10 recipes to save their lives because it will save their lives. At the same time, it will take a lot of bloody pressure off the health care system.