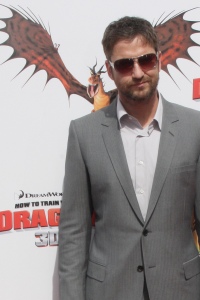 SheKnows: Gerard, we see you in all kinds of movie genres. Do you have a favorite?

Gerard Butler: Musical, animated, romantic comedy, action comedy, thriller, drama and action. That’s six. But I don’t want to blow my own horn. I think my favorite to do out of all them I would have to say is DreamWorks animated 3-D movies. But last week when I was doing Bounty Hunter it was definitely action comedies. But, honestly, it really does change. Sometimes, I’m doing an action movie and I say, ‘I’m never doing this again,’ but most of the time I love it. And it’s like that for any genre. There’s a lot of great stuff I get out of each of them, and then there’s a lot of stuff about each of them that makes me nuts.

SheKnows: Gerry, was it strange not to have your face on the poster for a change?

Gerard Butler: (Laughs) I kind of like that. I like it when people are surprised that you’re in something that you’re (just) talking in. I have my face on plenty of posters so it didn’t bother me in the slightest. Like America was saying, I think our voices are such a small part of this movie. We spent three years (recording) it every few months and the animators worked twelve hours a day to make the magnificent feat it is. So, it would be a little weird having my face on the poster. I’d feel guilty.

SheKnows: What does everyone have coming up that we can look forward to?

Gerard Butler: Actually I’m going to do some Shakespeare with Ralph Fiennes, it’s his debut (as a director); Coriolanus, we’ll be shooting in Serbia. Then I’m going to be working with Marc Forster who did Monster’s Ball, Finding Neverland and the last Bond movie, and we’re going a movie called Machine Gun Preacher about a former drug dealer who, it’s a true story, is now fighting with the Southern Sudanese People’s Liberation army. He became a preacher in Pennsylvania and raises money for an orphanage that he runs down in southern Sudan and literally uses machine guns to fight the rebel forces down there. Fascinating story, I think. If that’s not fascinating I don’t know what is.

America Ferrera: Monday I’ll start shooting the very last episode of Ugly Betty, which is a big culmination thing for me in my life.

SheKnows: How many episodes was it?

America Ferrera: Yeah. It’s hard for me to even imagine what my life is going to be like after that last day because I’ve been doing the same thing for the last four years, five days a week, ten months out of the year. In between I’ve squeezed in a movie here and a movie there. Now I’m just excited to sleep and not feel like I have four weeks to find something that is worth doing and do it.

It’s funny that of course Betty’s ending, I had a film come out last week (Our Family Wedding), How to Train Your Dragon is coming out this week. I’ve produced and acted in a film that was at Sundance, and it was all like in one month, so four years of my life all culminated and now I have no interesting answer to the question what are you doing next? I wish you had asked me that months ago. I think what I’m doing next is probably going to sleep and relax and just have that exciting feeling of anything’s possible.

SheKnows: What about you Jay?

Jay Baruchel: In July I have a movie called The Sorcerer’s Apprentice coming out and I just finished a movie called Notre Dame de Grace which is the second movie I’ve made with this director, Jacob Tierney, back home in Montreal. He’s one of my best friends. We made a movie called The Trotsky together, that actually comes out in wide release in Canada in May and premieres in the US at the Tribeca Film Festival. And then a lot of sleeping like this chick here.

SheKnows: Gerard, are you involved in a Phantom of the Opera sequel? (Andrew Lloyd Webber’s Love Never Dies is now on stage).

Gerard Butler: I actually went to that on the opening night in London. I just happened to be there by coincidence. I didn’t plan it until five o’clock that evening. It was very cool, a very interesting production. But, no, I don’t think I’ll be doing it. I doubt very much they’ll be asking me. But it was great fun to watch. Anyway, I’m sure it would be a long time away for making the movie.