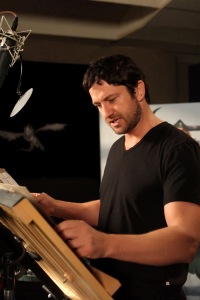 SheKnows: For each of you, was there a liberation for you getting into the recording booth and being able to be big and over-the-top (I look at Gerard)… and did you ever get a chance to see each other in the booth or was it always just you and the directors alone?

Gerard Butler: It’s freeing in the way that you’re not constrained by false beards and uncomfortable costumes and you can do what you want in there (the recording booth), and you don’t have to look at 150 extras who you know are sitting going, What the (expletive) are you talking about? Or, You look like an idiot in those leather underpants. (We all laugh)

Jay Baruchel: What movie could you possibly be referring to (laughs)?

Gerard Butler: Nim’s Island. But then again, sometimes you miss the opportunity to be out actually on location and have the true environment around you. But I’d say more than anything though, it was cool because it was different. It was something that I’d never done before.

America Ferrera: First I did a session with Jay and Jonah Hill, was it just the three of us?

Jay Baruchel: Yeah, I think so.

America Ferrera: We did the kind of friendship, camaraderie stuff. I started on it three years ago, and I think they did as well, and the story has changed a lot and progressed. It took a while, for the filmmakers and for us, at least with my character, to figure out what Astrid was and who she was, and how tomboyish was she? Did we want her to be softer, did we want her to be rougher and how much did she like Hiccup, and how much didn’t she? (Jay cuddles closer).

I don’t think I knew who my character was until I got in the booth with Jay. It certainly informed everything when I got back in the booth and was by myself, because I knew Jay’s energy and knew who our characters would be with each other and I just loved getting to work with Jay. I was terrified. I’d done one animated film before, (Tinkerbell for Disney) but it was a small thing. So this was kind of my first feature animated film, so getting to work with him, he’s such a pro, made it easier for me.

Jay Baruchel: Thank you, likewise, 150 percent. Like she said, just being able to play around once or twice with any of the other actors, it informs what you’re going to do. You take it with you. You remember what their energy is like and all that stuff. 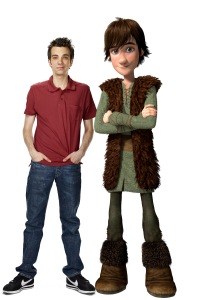 I’d like to think for me that I’m a better actor for having done this movie, because having to only speak, it kind of robbed me of some of my crutches. I gesture like a son-of-a-bitch. And I’m real fidgety and all this stuff. And when it was just my nasal-ass voice, I had to figure out how to sell stuff without going (he gestures all over the place).

So it was like going to acting school for three years in a way. And then at the end to see how it turned out, I had real high expectations and this just shattered all of them. I’m as proud of this as I am of anything I’ve ever done. It’s absolutely beautiful, it reduced me to tears. I was embarrassing at the end of it.

SheKnows: America, did you relate to your character in a particular way? She was trying to prove herself in a group of men. Did you ever find that in your own life?

America Ferrera: Absolutely. Just sitting up here and being the only girl in this man-powered conference.

Jay Baruchel: It is powered by men. Glad you got the memo.

America Ferrera: I was always a girl who, when I was younger I played baseball with the boys, I didn’t not play softball. I did not want to play softball. I wanted nothing to do with it. I wanted to play baseball with the guys and I wanted to be as good as them, so I think I definitely related to Astrid. And I thought it was so cool that Dean and Chris (the directors) cared enough to amp up Astrid’s character.

She was like a smaller, one of the friends characters, and they made Astrid and Hiccup’s relationship stronger, and then they really gave that character a purpose. She had much more of a back story than they gave her in the beginning. So I totally related to the character, and I was super happy that now girls can go watch this movie and say, I can train a frickin’ dragon too. (We laugh)

SheKnows: America, what was it like playing a Scandinavian role?

America Ferrera: Well, I don’t know how Scandinavian I made her. She sounded like she came from the San Fernando Valley, she’s from the 818 (area code). That’s what was so much fun about it. She wasn’t really me or a version of me, she was her own thing, and I just got to be one small part of creating her. I just had fun with it. I always came back from the sessions feeling so relaxed like I did yoga or something, because the last thing they always asked me to do before the session was over was scream. They were like, Give us like five different kinds of screams, because I do a lot of screaming in this movie.

Gerard Butler: I remember that. There was a lot of screaming.

America Ferrera: They’re like give us like a Viking chant or something. So it was very cathartic and fun and I felt like I was in very able hands and I could just have fun and give them what I had and they were going to turn it into something beautiful, and they did.

Up next…Butler admits a fondness for Broadway.