At SheKnows’ Beverly Hills interview, Ferrera told us how she loved playing Astrid, a blonde, teen Viking dragon fighter while surrounded in the film by hot and fun guys. Sometimes, she even got to record her voice in the booth with them. 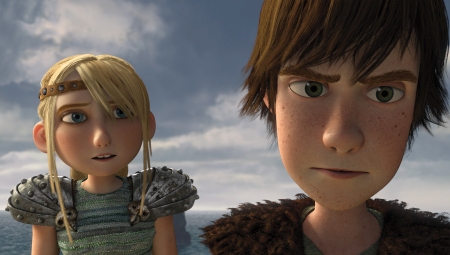 Gorgeous Gerard Butler loved his role as Stoick, a macho Viking dad whose protection for his wimpy but brainy son (Jay Baruchel) comes off as disapproval and Jay feels that his background as a misfit, dorky teen really informed his performance as Hiccup, the film’s eventually heroic lead character.

How to Train Your Dragon is based upon the whimsical works of British writer Cressida Cowell (no relation to Simon) whose book series about a town of Vikings co-existing with dragons inspired the DreamWorks Animation team to tell the back story in which the macho men (and a few kick butt women) of the village make the transition from dragon killers to dragon pet owners; all due to the humane and heroic efforts of young Hiccup, Astrid and their group of adolescent homies.

During our interview we got the impression that these actors are very proud of their work and of the film and also are having a jovial and silly blast talking about it. 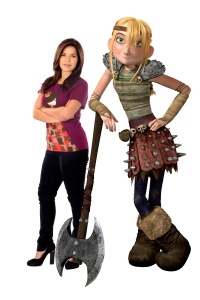 SheKnows: America, you’ve been in all kinds of live action films. What made you want to voice an animated character and why this story?

America Ferrera: I loved this movie, and I didn’t really care what the movie was about. When DreamWorks called and said, ‘Do you want to be in a DreamWorks animated film?’ I said, ‘Yes.’ They told me what the character was, and showed me the world, and I would have said yes to any of it. When someone recently asked me what movie character in the history of movies that I related to the most, what I came up with was the Little Mermaid, Ariel (the guys look at her strangely).

This was like wish fulfillment for me, getting to play, getting to show up in a recording booth, and something that’s really fun about this is being a very small part of a huge result. It’s satisfying to show up and be a part of something so cool, that you were just a tiny part of really. The amount of hours we put in compared to the amount of hours everyone else on this project put in, it’s incomparable, and I just wanted to do this because it seemed like so much fun, and I feel very lucky I fell into it.

SheKnows: Jay, when you were a teen did you have a misfit problem like your character Hiccup? How did you channel your inner sixteen-year-old to play this guy?

Jay Baruchel: That was very easy. Look at me (We tell him he’s cute!). Well, I always spent plenty of time behind closed doors writing and drawing or doing whatever, escaping into my daydreams. I was training my dragon. (Gerard is trying so hard not to laugh). Hey, don’t be inappropriate! I think us weird kids that’s what happens. That’s why I think Hiccup’s a great analogy for every kid that isn’t playing sports in high school.

Gerard Butler: I think Hiccup’s a great analogy for every kid because even when they’re playing sports there’s still that coming of age thing where you want to get the girl, you want your friends to love you, you want your dad, your family (to love you).

I don’t think there’s a teen in the world who doesn’t go through that process of feeling awkward and feeling the odd-one-out. I just think it’s very in accordance with myth and history that we all go through that same thing. But I think that what Jay is saying is even more appropriate for somebody like Jay, who still locks himself away and ‘trains his dragon’. I meant that in the best way.

Jay Baruchel: I took it as such.

America Ferrera: Aside from being an outsider and the dorkiness and the wanting to be accepted, I really related to a kid wanting to be great in some way, not just a Viking, but the greatest Viking in the world. And even though Hiccup’s an outsider, he (does something great). 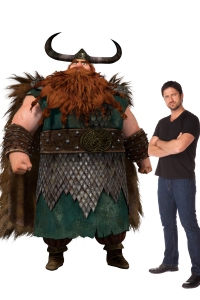 SheKnows: Gerry, why did you use your native Scottish accent as a Viking? Aren’t they Scandinavian?

Gerard Butler: (Laughs) Why would you choose me, when these guys were doing an American accent? The least Viking accent you can imagine.

Jay Baruchel: His is closer to how they actually would have sounded than us.

Jay Baruchel: We sound like we’re from the food court at the mall!

Gerard Butler: By the way, interesting that you should say that because this was the only movie that I think I’ve ever made or will make that, after watching it for the first time, realized that my accent was not Scottish enough. I realized that I was doing a mid-Atlantic kind of like (in an American accent), Vikings, man, we must work. I’m like, What was that? I was kind of stuck in the middle. I think a strong Celtic accent lends itself to Vikingness. I think a strong Celtic accent lends itself to any kind of warrior breed and it was the same in 300 as well.

SheKnows: We agree. What’s the best thing about doing a voice in an animated movie?

Gerard Butler: I think maybe the best thing was the treat that you get at the end of it to see it all come together, because really as much as I think everybody in this cast is fantastic, I think the real geniuses are the guys who wrote it, the guys who directed it and the animators who created it.

Gerard Butler: Because when you see it you go, Wow. I didn’t know this was the magical spectacular, wonderful world that we had all entered into.

America Ferrera: And it’s proof when you see it the different stages, because I saw a version of the movie where a third of it was animated, and then the other scenes were in different stages, like stick drawings and others were like half animated and some were animated but not lit. I felt like in the scenes where it wasn’t fully animated, where it was a voice to a stick figure, there wasn’t that emotional connection as when the animators do their work and create the humanity in the characters through their animation. They’re more than half of the performance I would say.

Up next…America, Jay and Gerard take SheKnows inside the How to Train Your Dragon recording booth!