In a not so surprising move, Katherine Heigl is leaving Grey’s Anatomy — and we won’t be seeing any more of Izzy Stevens. 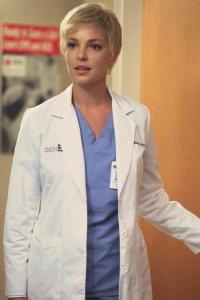 “I am done,” Heigl told Entertainment Weekly of her time on Grey’s Anatomy. “We just finalized our agreement. Everyone had been working really hard to find an amicable and gracious way of letting go and moving on. It’s sad, but it’s what I wanted.”

As show fans know, Heigl’s Izzy survived a near death experience at the end of last season, but we still haven’t seen much of her this year.

While Heigl took a three-episode leave to shoot a movie, Izzy went MIA mid-cancer treatment, ditching her hubby Alex. She returned to the screen in November, but that didn’t last long. The new mom took a belated three-month maternity leave around New Years to spend some quality time with her adopted daughter, Naleigh.

Izzy’s popped in from time to time this season on Grey’s Anatomy, but hasn’t been central to story. When we last saw her, she was intent on getting back to work and back with Alex. Neither panned out, however, as there was no job for her at Seattle Grace and Alex told her he was glad she’s cancer free, but couldn’t take her back after the way she’d abandoned him.

Heigl was slated to appear in the final five episodes of the Grey’s Anatomy season, but that January appearance will be her last. She’s exiting her contract 18 months early so she can focus on her husband and daughter.

“I started a family, and it changed everything for me. It changed my desire to work full-time,” she says. “I know I’m disappointing the fans. I just had to make a choice. I hope I made the right one.”

Word is Heigl has much more to say in her upcoming Entertainment Weekly cover story, due out Friday. She dishes about her time at Seattle Grace, including the behind the scenes fights, feuds, controversies and mistakes.

Grey’s, meanwhile, is moving right along without her — and it shouldn’t be that hard for fans, since we haven’t seen much of Izzy anyway.

“The studio wishes her well,” ABC said in a statement “Everyone at Grey’s Anatomy is now focused on delivering a shocking season finale and a great show for seasons to come.”