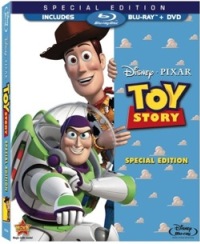 Toy Story and Toy Story 2’s Blu-ray combo pack arrived in stores March 23 and we could not be more excited about the lightning-fast sense of humor that is the Toy Story team coming home.

The pairing of the two Disney Pixar films is no accident.

Toy Story 3 arrives in theaters June 18 — don’t miss our Toy Story 3 first look- below — and after the refresher course in Toy Storyology courtesy of the Toy Story Blu-ray combo pack, consider us waiting front-and-center for the latest Story.

The Toy Story Blu-ray combo is the first time these two films have appeared on high-definition video.

Smartly, Disney and Pixar have taken the power that was the big screen re-release of Toy Story and Toy Story 2 earlier and raised the bar via releasing the films on Blu-ray. The visual marvel that is the new digital home video technology truly shines while watching a Pixar and Disney instant classic. Jaws are sure to drop at the sight of the 1080p high-definition picture. 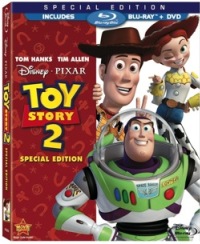 A history of Toys

In 1995, Toy Story landed in theaters and made history as the first fully computer animated feature. Disney Pixar’s Toy Story 3’s June 18 arrival in theaters marks a new chapter for Hanks and his Toy clan led by the voices of Allen, Don Rickles, Annie Potts and John Ratzenberger.

Disney Pixar has pulled out all the stops including never-before-seen content with the Blu-ray release of Toy Story and Toy Story 2.

Cue the drum roll, the eagerly anticipated third Story 3-D arrival of the Toy Story franchise is merely months away.

Read on for more Toy Story