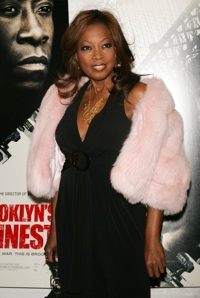 Jones, an author and former co-host of The View, underwent the rarely-performed surgery just days before her 48th birthday.

“On Wednesday, March 17th, a pre-planned cardiac surgery was performed on Star Jones,” read a statement from Star’s rep.

“This recent surgery is a follow-up to the thoracic surgery she had 30 years ago. The procedure was successful and she is recovering well with her family. Star is grateful for everyone’s thoughts and prayers.”

Jones is recovering nicely with the help of ice chips and even Tweeted her thanks to fans. “Thank you for all the good wishes and prayers … I feel them all,” she wrote. “By the way… who knew that ice chips could taste like steak!”

Jones even felt well enough to share her views on the health care reform vote.

“Can you imagine me trying to recover without health care?” Jones Tweeted. “Those who voted against it need to hang their heads in shame.”

Jones underwent gastric bypass surgery in 2003 and caused a controversy by denying the reason behind her weight loss for four years. Her contract with The View was not renewed amidst complaints that she used her seat on the show to solicit freebies for her 2004 wedding to Al Reynolds, a marriage that ended in divorce four years later.