George Clooney and Meryl Streep have finally joined forces on screen and it’s in the form of animated foxes courtesy of Wes Anderson’s The Fantastic Mr Fox. Mr Fox arrives via a Blu-ray-DVD combo pack March 23 and SheKnows has an exclusive DVD clip in celebration of the Oscar-nominated film. 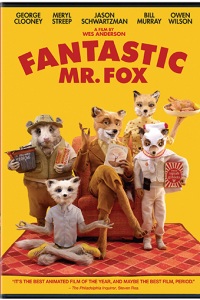 The Fantastic Mr Fox scored an Oscar nomination for Best Animated Film and although it lost to the Pixar gem Up, Mr Fox marked an astonishing leap in animation that was reflected in simply being nominated.

Clooney plays the titular character that has put his wayward days behind him living in the lap of family happiness with his wife (Streep) and little foxes — son Ash (Jason Schwartzman) and their nephew Kristopherson.

When Mr Fox gets the idea for one last heist robbing the local farmers, he sends his family’s well-being into chaos.

It is filmmaker Anderson and his first venture into animation that showcases an artist effortlessly able to tackle film’s many genres. Witnessing this visual and dramatic marvel on Blu-ray is pure pleasure.

The Fantastic Mr Fox is one of those animated gems that within 15 minutes of the film’s commencing, the audience is lost in a story so strong they forget they are looking at drawn figures and not real people.

Much of that credit, of course, goes to the strong vocal talent Anderson has assembled. Whether in Fox form or in vivid real life, such as her Oscar-nominated turn in Julie and Julia, Streep is sensational. Clooney, fresh of his Oscar-nominated performance in Up in the Air, matches Streep’s bionic woman of acting, step-for-step.

The Fantastic Mr Fox is based on the adored children’s book by Roald Dahl — most famous for Charlie and the Chocolate Factory.

When it comes to family film fare, few actually achieve what The Fantastic Mr Fox manages in its compelling 87 minutes. Anderson’s film both a movie children will place in the watch repeatedly category, while adults can take pride in a film that has earned Oscar accolades for its mastery of the art of filmmaking.

Read on for more George Clooney and Meryl Streep