How to Train Your Dragon swoops into theaters March 26 in 3-D literally bringing author Cressida Cowell’s vision to life. 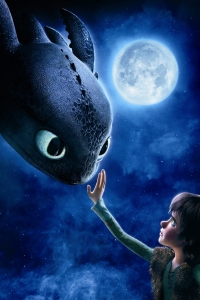 Considering the film is from the team that brought audiences Madagascar, Kung Fu Panda and Shrek, there is a level of excellence already credited to the animated team.

DreamWorks Animation is a convergence of its founders — Steven Spielberg, David Geffen and Jeffrey Katzenberg, yes, but its animated dreams have largely laid with a former Disney wunderkind in Katzenberg.

His impeccable handprint is all over How to Train Your Dragon in its ability to bring a beloved children’s book to the big screen while simultaneously capturing the spirit of the written word and forging new cinematic ground as most natural born animators are driven to accomplish.

In our exclusive clip, the woman at the heart of the soon-to-be movie phenomenon gets the full DreamWorks and SheKnows close-up courtesy of directors Chris Sanders and Dean DeBlois. Witness what the feelings are the envelop an author as their imagination takes a visual form.

How to Train Your Dragon takes place when Vikings ruled the world. One of our late night faves, Craig Ferguson, voices the head Viking Dragon-trainer seeking to bring sense to his young protege who seems to believe he has a dragon that can be trained. Heavens!

Cowell and her Dragon enjoy the terrific casting of not only Ferguson, but also comedy stalwart Jonah Hill, She’s Out of My League breakout star Jay Baruchel, TJ Miller, Christopher Mintz-Plasse and scene-stealer Kristen Wiig.

How to Train Your Dragon: exclusive!