Julie Klausner is a writer and performer who makes her home in New York City. I Don’t Care About Your Band is her first book, a juicy and hilarious memoir. 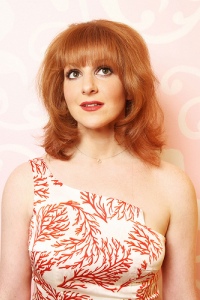 Klausner has written for TV comedy shows including Best Week Ever and The Big Gay Sketch Show, and contributed to Robert Smigel’s TV Funhouse on Saturday Night Live.

Klausner, currently the Senior Editor at Sling.com, sat down with SheKnows for an exclusive chat about her book.

SheKnows: You express your lack of interest in indie-alt rock, did you know there’s a song called I Don’t Like Your Band by indie darling Annie? (Does it prove your point that even indie rockers don’t like indie rock?)

Julie Klausner: I do know there’s a song called that. And my book is the second thing that comes up when you Google the title! I love Annie. I consider her a pop star, though, not an indie rocker. She’s only indie because she lives in Norway. By the way, that makes a lot of sense.

SheKnows: When you wrote Modern Love the article in The New York Times that kicked off the book, were you testing the waters to see how the response was or did the book idea come after the article response?

Julie Klausner: The thing I wrote for Modern Love was one of a few stories I was working on at the time about failed dating experiences. As soon as I got word that it would run, my agent put fire under my hinders to shape up my stories and ideas into a proposal in time for the exposure that getting something published in the New York Times brings along with it. And soon after that, I sold a book! And then I wrote a book. And then I realized that you can’t eat that many cookies without having a hard time fitting into your “going out jeans” and then, your “staying in jeans.” But I don’t want to spoil my next book, which is a weight loss memoir. I’m just kidding. Shoot me in the face if I write one of those — with a gravy gun!

SheKnows: Was it hard to go from writing short format articles and sketches to an entire book? What were the challenges you faced?

Julie Klausner: Oh, general isolation. Not talking to people during the day. Enduring anxiety about whether it would shape up to a good final product. Worrying, alone in my apartment, about how it would be received. That said, it was way scarier not making any money from writing sketches and freelance articles than it was sitting at home and getting paid to write a book.

Up next…Klausner dishes why a memoir versus a novel and how humor is a priceless commodity in romance!