Comedic writer and performer Julie Klausner’s memoir of her dating life takes the reader on a riveting ride from her first sexual awakenings of prank calling sex hotlines with her teenage girl pact to her hatred of lanky arrogant indie rockers in Williamsburg. 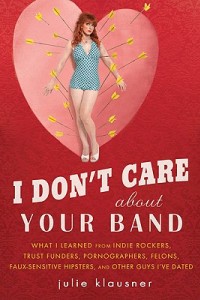 Throughout Julie’s search for a boyfriend her spirit and honesty make this book a hilarious romp into another person’s diary with their permission.

Klausner’s culture references make this a must read for anyone over thirty who’s been through the dating wars and lived to love another day. The witty skills Klausner has honed from writing for Saturday Night Live and Best Week Ever serve her well in long form.

I Don’t Care About Your Band reminded me of Laurie Graff’s You Have To Kiss A Lot Of Frogs with less Broadway, more hope and a lot more laughs.

Both authors are red-headed performers but Klausner’s dating criteria does not limit her to having to marry a Jewish man, something that Graff’s unrelenting “must have” leads her to lying about being a “schickster.” Julie takes her dating life to a wide and curious selection of men (the truly ugly troll both fat and disgusting) but she has a strong personality that leads her to be open, but always honest about what she wants while never losing her integrity.

Julie’s unlikely suitors lead her to question male arch-types she was exposed to like Kermit the Frog and his lack of effort to capture the attentions of Miss Piggy, who allowed him to treat her like crap.

All of Julie’s dating traumas lead her on a path of growth that will have you howling along the way. This is a down and dirty detailed memoir so anyone looking for tales of romance will find themselves off-the-beaten-path here but one that will fill that Sex and the City void.

Review: I don’t care about your band

The Opposite of Me: Perfect Spring reading
Bulletproof Mascara: Move over James Bond
Winter’s top books