Tiger Woods gave his first interviews since his sex scandal broke March 21 to ESPN and the Golf Channel in anticipation of his April return to the golf course at The Masters. 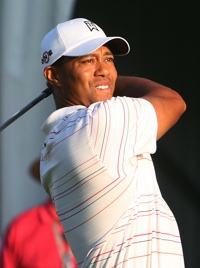 In separate, short five-minute interviews in which Tiger agreed to answer any question asked, the weary-looking golfer expressed stern condemnation of his own behavior but offered little new information.

“It was hurtful, but then again you know what, I did it,” he said. “I’m the one who did those things and looking back on it now with a more clear head, I get it,” Tiger said.

“I can understand why people will say these things because you know what, it was disgusting behavior. As a person, it’s hard to believe that was me, looking back on it now.”

Tiger also discussed his thoughts on what his deceased father would have to say to him about this mess. “He’d be very disappointed in me. We’d have numerous long talks. That’s one of the things I miss, I miss his guidance, I wish I could have had his guidance through all this to have him help straighten me up. I know he would’ve done it,” Woods said.

“I can’t say on air (what he would have said) but he would’ve been very direct. Basically (he’d say), you need to get your life headed in the right direction again. I was living a life of a lie, I really was. And I was doing a lot of things that hurt a lot of people. And stripping away denial and rationalization you start coming to the truth of who you really are and that can be very ugly. But then again, when you face it and you start conquering it and you start living up to it, the strength that I feel now. I’ve never felt that type of strength.”

Tiger stepped around the question of how many women he cheated with, saying “just one is enough and obviously that wasn’t the case.” 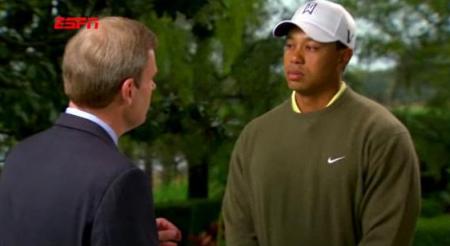 He admits he is in treatment but would not disclose exactly for what, although it seems obvious to be sexual addiction since there’s no treatment for pompous self-entitlement. He also would not disclose any new details of what happened the night the story broke after he crashed into a tree in his front yard allegedly after an argument with his wife when she read text messages from one of his mistresses. “It’s all in the police report,” he said. “Beyond that, everything’s between Elin and myself and that’s private.”