The news of Jesse James cheating on Sandra Bullock has become front page entertainment news and fodder for the morning news and talk shows, but it’s also taken over Twitter. 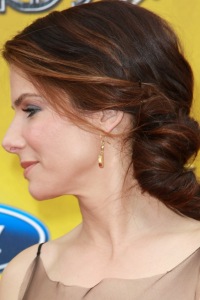 A Twitter search for Bullock turns up countless tweets of support for America’s Oscar winning sweetheart and several of those tweets come from celebs.

“sandra b: my heart bleeds for you,”Access Hollywood-Today show correspondent Maria Menounos Tweeted. “Sending you a huge hug, lots of love and hope-there is a good man for you out there. you deserve better”

Menounos later posted a link to Jesse James’ apology, along with the note, “I hope they can work it out.”

Bravo’s Millionaire Matchmaker Patti Stanger Tweeted, “Sandra: don’t need to be with loser like Jessie. You were my favorite waitress at Diane’s Hamburger in nyc. Thx for the extra pickles.”

Meghan McCain, meanwhile, kept it simple and Tweeted, “what the hell Jesse James?!?!”

Michelle ‘Bombshell’ McGee, the other woman in the scenario, has also spoken out via twitter. She hasn’t made a statement, but rather reposted a tweet from A.V. Flox, one of her supporters.

“I find it typical and pathetic that people are crucifying @MichelleSinai when she never promised anyone to be faithful,” was the tweet.

A.V. Flox has a valid point. James is the one who made promises to Bullock that he allegedly didn’t keep, not McGee. Many women believe we owe it to each other to leave someone else’s man alone… but does that give us the right to slam the other woman when things take this sort of ugly turn?

Meanwhile, Bullock’s Sunset Beach neighbors are dealing with the issue from a completely different angle.

The star has allegedly abandoned her home, but since the story broke, the 16900 block of South. Pacific Avenue has been overrun with photographers, reporters and paparazzi.

Neighbors have been calling in complaints, but so far, there’s nothing the Orange County Sheriff’s Department can do about the madness.

“They were all legally parked and within their rights,” OCSD spokesman Jim Amormino said. “The press has a right to be where the public is.”