Jennifer Aniston and Gerard Butler have made headlines of late with their supposed romance that began on the set of The Bounty Hunter. Whether sparks are really flying between Aniston and Butler in real life hardly matters: The duo’s on-screen chemistry is magical. Together, they could make a phone book reading sizzle.

Regardless of their real-life romance, Aniston and Butler are perfectly cast opposite each other. These two could read the phone book together, and it would pop on the silver screen. The Bounty Hunter is good fun, yes, but it left SheKnows craving more from these two. 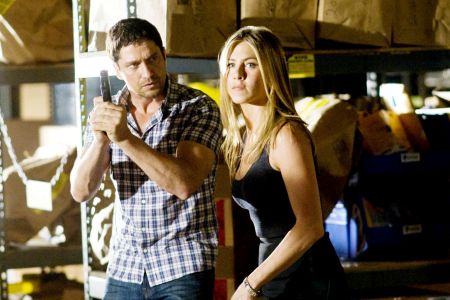 Aniston is Nicole, a driven New York Daily News reporter who has stumbled on the story of a lifetime.

There’s only one problem: A pesky court appearance demands her attention, but a source is ready to provide pivotal information on a story. Forget court. This is high New York City journalism!

Milo was once one of New York’s finest cops and has fallen on hard times since his divorce from Nicole. He is so desperate for cash that he gladly accepts a gig as bounty hunter, because it involves taking his dreaded ex-wife to jail.

As far as romantic comedies with a touch of action and suspense go, The Bounty Hunter is pretty good, just not great. Watching Aniston and Butler is pure joy. The film is a good vehicle for the couple. But, there it is: Good is not great. Watching Butler and Aniston as they fiercely volley the banter penned by writer Sarah Thorp and directed by Andy Tennant is really enjoyable.

But when only pure cinematic combustion gets people to visit the nation’s movie houses, The Bounty Hunter is, well… good, not great. It’s a three-star movie that, given the chemistry and talents of its leads, leaves audiences yearning for something more meaty for the Butler-Aniston combo. We hope this is just the beginning of a career-spanning movie pairing that rivals Humphrey Bogart and Lauren Bacall.

Given the wide slate of films that opened March 19, The Bounty Hunter faces some stiff competition. Still, the sizzling onscreen chemistry from Jennifer Aniston and Gerard Butler will likely be enough to launch The Bounty Hunter to the top of the charts.