Dancing with the Stars returns to primetime for its 10th season on March 22. Although it may look like another DWTS dazzling season on the surface, a few changes are in store that may make this one of the best seasons ever! 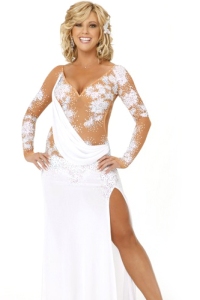 First, you may recall that former Dancing with the Stars participant Brooke Burke has taken over the co-host role of Samantha Harris. Judges remain the same, as does the show’s host, Tom Bergeron.

The cast of Dancing with the Stars is fresh. Right on the heels of his gold-medal-winning performance at the Olympic Winter Games, Evan Lysacek is vying for the trophy. Considering his choreography background and the success of past winners such as Kristi Yamaguchi and Apolo Anton Ohno, we’re willing to bet Evan takes home the gold on the show, too.

There’s also the Pussycat Doll. Her dancing background gives her a definite advantage. The sizzle factor is there, as well.

Jake Pavelka, fresh from the wrapup of The Bachelor, will don dancing shoes to mambo his way through the competition. And let’s not forget Kate Gosselin. Although naysayers are dissing the idea that she’s on the show, the fact remains that she’s a working mom and needs to support her eight children.

more dancing with the stars