When it comes to the ladies on Wisteria Lane, as we head into the home stretch of Desperate Housewives’ sixth season, it appears that a lot of surprises are in store.

You may recall from last week’s episode, Gabrielle and Angie trekked to New York to find Ana and Danny and a random meet up with Heidi Klum and Paulina Porizkova. 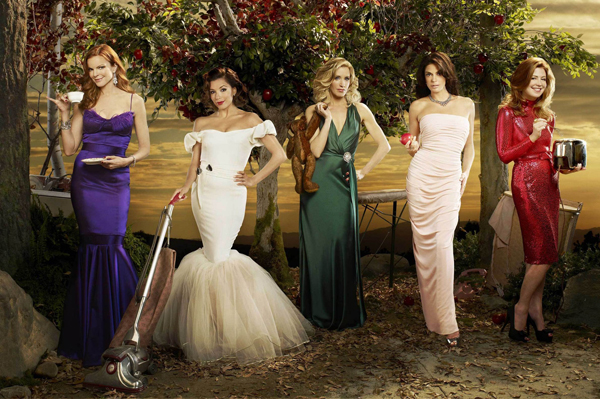 This encounter resulted in the former model to come to an unanticipated realization about herself. And back at the ranch, Mike tried to show Susan that he’s completely masculine and the Scavo family gets a surprise when they see Preston return from Europe, along with a gold digger.

Although Bree found an unexpected connection to a new employee, Katherine seems bewildered when it comes to her feelings toward Robin.

This week’s stunner of an episode centers around a cancer survival party. As Gabby gives Susan a piece of her mind for selling candy at the party, Katherine and Robin have a face-to-face talk just as the room is silenced.

Angie’s ex makes a cameo on Wisteria Lane and Lynette becomes suspicious of Preston’s fiance. And oh yeah, Katherine comes out of the closet. Suffice it to say, it’s another whirlwind of an episode as the show swoops into May for the home stretch!

It appears between now and then, Desperate Housewives will travel back in time!

Producers are taking audiences back to Wisteria Lane in 1994 and the show’s deceased narrator, Mary Alice (played by Brenda Strong), will come back as the living. The episode will feature Diane Farr who plays a woman who morphs into an abusive drinker as the result of her husband leaving her sixteen years prior to that.?

read on for more Desperate housewives