In The Runaways, through the performance of Kristen Stewart, the legend of Joan Jett only expounds. Without Jett, there would not be an army of rocker chicks that have the freedom to express themselves without worry of cultural whiplash to a female expressing themselves in a previously-held man-only world that is Rock and Roll. 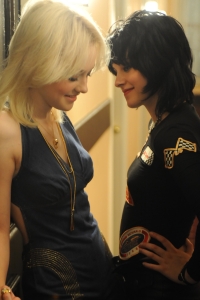 “I think our generation has grown up with really strong female music performers,” said Dakota Fanning, who portrays Jett’s Runaways bandmate Cherie Currie. “We’re used to that. I think this movie will open the eyes of people our age who don’t really know that it was so tough for them once upon a time.”

The Runaways hits screens nationwide March 19 and is not only a film music aficionados can treasure, but is also a film that documents the rough path women endured while busting open the rock and roll door that Avril Lavigne and her generation of rocker chicks inhabited with cultural reprisal for their artistic freedoms of expression.

Jett was on the set throughout The Runaways shoot and proved invaluable for Stewart and her acting clan. Considering Stewart’s impeccable capturing of Bella Swan in the Twilight Saga, having a global phenomenon actress extol your virtues on screen was not difficult for Jett to coach.

“George, why are you playing my songs back to me, I thought we were supposed to listen to Kristen?” Jett asked of music supervisor George Drakoulias during one editing session. Upon seeing the visual proof, Jett was stunned. “Oh that’s pretty cool.”

Fanning was also thrilled to have her character on set as well. “I was very lucky to have Cherie help me understand the character,” said Fanning. “I was able to ask her questions that led to stories about my character and gave me more background, gave me an extension of what was on paper.”

Stewart was personally bewildered at what Jett went through in order to have themselves heard. “Joan’s literally said a million times, that rock and roll saved my life,” she said. 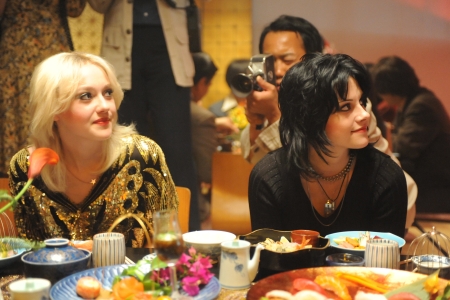 Considering the infamous shadow Rock and Roll casts, Stewart found hilarity in the fact the shark tank of the music business is what allows Jett to still work in 2010. “(It) is funny, because that being in Rock and Roll is what put her in some of the most extreme circumstances.”

The Runaways, as seen through Stewart and Fanning’s eyes, is as much a call of girl power as any. Stewart understood what it was that late 1970s America found so revolutionary.

“If people are being themselves, it’s going to get really intense. I don’t know…taboo,” Stewart said of Jett’s personal expression. “When something is true, people are going to be like: Oh, they’re a little too hardcore.”

Fanning chose to focus her performance on the relationship between her character and Jett, before, during and after The Runaways Rock and Roll run. “They did get really close. They went through a lot together,” Fanning said of Jett and Currie. 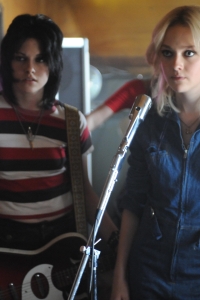 “They may have went their separate ways, but they share a really deep bond that no one will ever will ever be able to break. It is something that people could never understand,” Fanning said. “And at its core, that’s what The Runaways is all about.”

After spending hours upon hours with Jett, Stewart emerged not only a fan of Joan Jett, but also the resource an actor has when portraying a still-living legend. “Joan’s our executive producer. She was there every day spending time with me. To prepare for a role like this, you can research, read interviews, watch old footage, but to my benefit, there wasn’t a whole lot of that available. I was able to talk directly with Joan and think I would have felt like a fraud had I not,” Stewart said.

For the actress who now enjoys worldwide superstardom, her Jett opinion is pretty profound.

“That’s what Joan is to me, she represents freedom.”