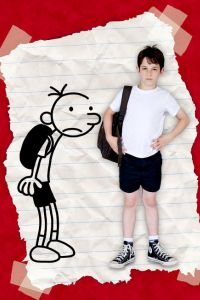 If you have children, you’ve probably heard of the number-one best-selling kid series The Diary of a Wimpy Kid. If you’ve somehow missed the Wimpy revolution, however, it’s all about Greg and his prepubescent friends.

In the books, Greg’s scribbles and doodles recount the kids’ struggles to make their way in middle school, where others have already seen growth spurts and said hello to full-fledged adolescence.

“Greg is self-centered and can be kind of clueless,” Wimpy author Jeff Kinney said of his central character. “I don’t think Greg is a bad kid, necessarily, but like all of us, he has his faults. Stories with characters who always do the right things are a little boring. I wanted to create a character who was more realistic.”

The series has won acclaim for getting young, reluctant readers to pick up books, and now it’s been adapted into a live action movie, to promising reviews.

The family flick stars Zachary Gordon as Greg, and Steve Zahn and Rachael Harris as Greg’s parents. In addition to the “morons” at school, Greg has to put up with brothers Rodrick (Devon Bostick) and Manny (Owen Fielding). Thankfully, he has his embarrassing but loyal best friend Rowley (Robert Capron) to depend on.

“What the movie adds to the franchise is this really strong emotional component,” Kinney told The Wall Street Journal. “Greg and Rally are best friends, and in the film, you really care about that. You feel invested in these characters. I don’t think that’s there so much in the book, so I think of the movie as the book’s plus.”

Fregley, Chirag and Patty Farrell, fave characters from the books, also get in on the action. Fans should expect followups to the big-screen addition, assuming it does as well as the books.

In the meantime, Kinney is working on the next book in the series, and young readers already can pick up The Wimpy Kid Movie Diary, a movie-tie in book that features stills, script pages, storyboards, costume designs, preliminary concept drawings and behind-the-scenes fun.

The Diary of a Wimpy Kid trailer

Did You Hear About The Morgans? DVD exclusive clip
She’s Out of My League review
Matt Damon heads into the Green Zone
Eclipse trailer sneak peek