Did You Hear About The Morgans? premieres on Blu-ray, DVD and digital download march 16 and finds Sarah Jessica Parker and Hugh Grant heading to the rural hills from their swanky New York City life after witnessing a murder. 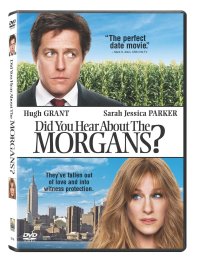 Only problem? The couple was about to separate!

SheKnows has an exclusive clip from Sony Pictures Home Entertainment of Parker and Grant sharing a light moment before the madness of their Did You Hear About The Morgans? adventure begins.

When the film premiered in theatrical release, SheKnows caught up with Parker she said witnessing the wilderness was a nice change from her usual urban jungle. “We were in Santa Fe, New Mexico, which was beautiful. I love traveling seeing differing places and seeing different cultures,” Parker said.

Parker treasured traveling, although returning home to husband Matthew Broderick and her three children, is always what life is all about. “It was a nice experience. But, then I get to go home (to New York)!”

The crux of Did You Hear About the Morgans? is how the fish out of water scenario gets a new twist in the form of two die-hard New Yorkers (Grant and Parker) who must adjust to life with each other are being on the verge of divorce, while transplanted away from their beloved Metropolis to the wilds of Wyoming.

Did You Hear About The Morgans? exclusive clip