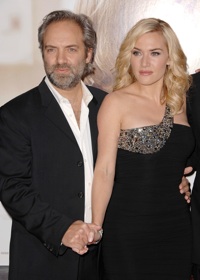 The award-winning couple went their separate ways at an unknown point earlier this year after a seven-year marriage.

“Kate and Sam are saddened to announce that they separated earlier this year,” their lawyers’ statement read. “The split is entirely amicable and is by mutual agreement. Both parties are fully committed to the future joint parenting of their children.”

Winslet and Mendes, both Oscar winners (Kate for The Reader and Sam for American Beauty) may have given hints as to their marital discord in separate statements last year.

In thanking her husband during her Golden Globe acceptance speech for her role in Revolutionary Road, directed by Mendes, Winslet said, “Thank you for directing this film, babe, and thank you for killing us every single day and really enjoying us actually being in such horrific pain.”

Mendes later commented that working together was difficult because she wanted to discuss the movie 24 hours a day and he just wanted to watch baseball at night.

The couple wed in 2003 and have a six-year-old son, Joe Alfie. Kate also has a daughter, nine-year-old Mia Honey, by her previous marriage to director Jim Threapleton.

Read on for more Kate Winslet