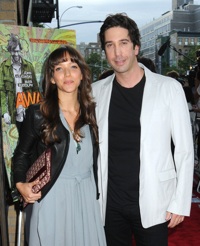 Schwimmer met photographer Zoe Buckman in 2007, when he was filming his directorial debut Run Fatboy Run (starring Simon Pegg and Nick Frost), a romantic comedy set in London. (Schwimmer directed episodes of Friends and Little Britain USA, but this was the first feature film he has helmed.)

The couple is currently shacking up in Chicago while Schwimmer directs Trust with Clive Owen and Catherine Keener.

On Buckman’s pro photography website, a project called Loo featuring women in and around club bathrooms has one snap showing two women chatting about their future husbands:

“I just want to marry someone like my Dad — is that weird?”

With their 19-year age difference, Schwimmer certainly could stand in for Buckman’s dad.

Will they throw their wedding in an abandoned London church? Will Rachel show up at the last minute? Will he call Zoe by the wrong name? Tune in for more celebrity wedding news on SheKnows!