The video for Lady Gaga and Beyonce’s Telephone has landed and… Wow! With almost 10 minutes of out-of-this-world glam costumes, the wild video is a shout out to women in prison flicks, Thelma and Louise, Tarantino’s Kill Bill and many more pop culture moments.

“There’s certainly always a hidden message in my music videos,” Gaga told E!. “But most predominantly, I’m always trying to convolute everyone’s idea of what a pop music video should be.” 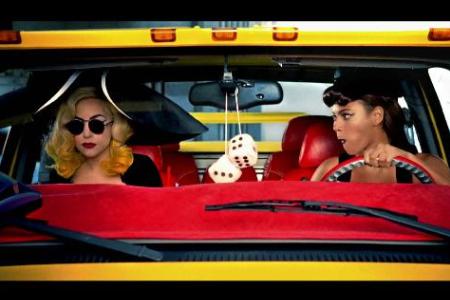 The video starts with Gaga being led to her prison cell, and anyone who’s seen any ’70s sexploitation women-in-prison movies such as Caged Heat will get the scary-meets-sexy vibe of Gaga’s incarceration.

Shortly after Gaga makes out with a manly prisoner, that reference is left behind, and Beyonce joins the party. She pays Gaga’s bail and picks up the jailbird in the infamous Pussy Wagon truck from Kill Bill: Volume 1. “There certainly is a [Quentin] Tarantino-inspired quality in the video,” Gaga told E!.

“I mostly love the way he uses different forms to create something new, but his direct involvement in the video came from him lending me the Pussy Wagon. We were having lunch one day in Los Angeles, and I was telling him about my concept for the video. He loved it so much that he said: You gotta use the Pussy Wagon.”

In Tarantino’s ride, the outrageously glammed-up duo go on a Thelma and Louise spree, taking out Beyonce’s hunky “boyfriend” Tyrese and a diner full of patrons with their own brands of poison. News reporter Jai Rodriguez gets the story, while the girls make their getaway. 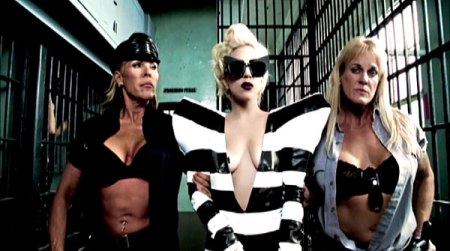 Fans will find a slew of cultural references amid the dance breaks and Gaga and Beyonce’s barely-there costumes. Paired with Gaga, Beyonce gets a chance to show her edgier side, even dropping some bad language. Beyonce’s alter ego Sasha Fierce has nothing on Beyonce gone Gaga fierce! “I was very excited to work with Beyonce again on the Telephone video,” Gaga said. “We had an amazing time working together on her video, and it sort of works out, because we both like women.”

Style maven Beyonce shines in the camptastic retro looks, but Gaga takes it all a bit further, of course. She even manages to pull off a pair of sunglasses made out of cigarettes, as well as a telephone hat and Diet Coke can curlers. Frankly, description can’t do this video justice, and SheKnows hasn’t come close to tagging all the cultural references hidden in the video.

See it for yourself, here on SheKnows Entertainment:

26 mins ago
by Daisy Maldonado