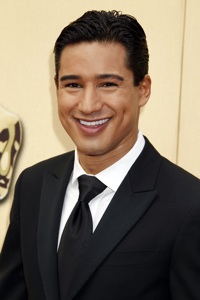 The multi-talented TV star and his girlfriend, Broadway dancer Courtney Laine Mazza are expecting a little one.

“Courtney and I couldn’t be more excited,” Mario told one of his TV employers, Extra. “I’ve waited my whole life to be a dad, this is a true blessing. I am looking forward to sharing this experience with my family and my family at Extra.”

The couple met when they appeared together in a 2008 Broadway production of A Chorus Line and began dating in 2009 after Lopez broke it off with his Dancing with the Stars partner Karina Smirnoff.

The couple announced the news to friends and family at a Super Bowl party last month. “With a huge smile on his face and surrounded by friends and family, Mario announced he was having a baby and handed out pricey cigars,” said a party attendee. “After the initial shock, everyone was thrilled by the news, giving Mario hugs and high-fives.”

But the friend says fidelity-challenged Mario won’t be walking down the aisle any time soon. “Although the baby news has thrilled Mario, he isn’t making any marriage plans… yet.”

Mario is known as quite the Lothario around Tinseltown, and his quickly-annulled marriage to Ali Landry is rumored to have fallen apart when she found out about his numerous indiscretions, most notably at his bachelor party. Landry dissolved the marriage a mere two weeks after the ceremony.

read on for more celebrity baby