After four seasons playing TV’s wanna-be fashion writer Ugly Betty, Emmy-winning 25-year-old actress America Ferrera bids goodbye in April to the red glasses and braces. This week, Ferrera is hitting the big screen as a Latina from a big family marrying an African-American in the culture-clash comedy romance Our Family Wedding. 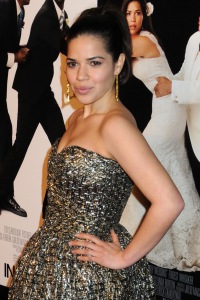 Ferrera also branches out from Betty later this month by voicing a blonde, kick butt Viking teen in the 3-D animated movie How to Train Your Dragon and she continues to produce noteworthy films in which she stars; 2008’s Towards Darkness and a Sundance offering about Iraq, The Dry Land. So, the eternal optimist and go-getter in Ugly Betty lives on!

SheKnows was pleased to chat with Ferrera about the sensitive culture clash at the core of Our Family Wedding and learned that she has a lot to say about growing up in multi-cultural LA and how, like her modern character Lucia, she is really very color-blind. The actress also seems to understand the family pressures put on young women today.

America had a Cleopatra vibe going for our interview in a gray, short-sleeved, empire-style dress by Shoshanna with an amazing round, Cleo-like collar embellished with hematite beading and some majorly high Catherine Malandrino heels. “I can’t run in them,” teased the star. “That would really hurt!” We sit down and promise to only chase her with words.

SheKnows: What attracted you to the script? What made you want to play Lucia?

America Ferrera: I was really attracted to this character and the conversations that I had with Rick (Famuyiwa), our director about making her a woman of her generation. I feel like we see wedding movies all the time and often the women are obsessed with this one day that means everything to them. For me, that’s never been the case. I’ve just never been the type of person who sits there and wonders what my dress is going to be like and I have tons of friends to whom that isn’t the most important thing either. I think women are a lot more complicated than obsessing over one day in their lives. (For Lucia) it was more about, I’m fine with just getting married at City Hall with my family and then getting on with my life with that confidence and strength and knowing what she wants.

Yet, there’s that sort of universal thing about you can be grown up and a woman and this sexual, smart, successful being and then when you get around family, you revert to being 15-years-old again (laughter). I think that’s universal. I’ve watched 40 or 50-year-olds do the same thing. Family structures are such strong things and it’s so hard to re-define yourself within your family and say “I’m a woman now. I’m an autonomous creature. I’m starting a life with someone you may not love or accept.” So, I was really interested in her journey toward finding the courage to be that woman that she was becoming and be it in that family structure. It’s such a hard thing to do. 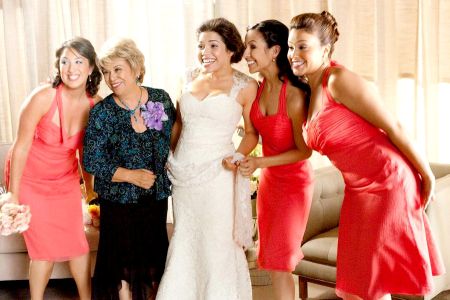 SheKnows: Lucia holds back a few secrets from her parents. Can you imagine yourself in a similar situation holding off telling your parents something crucial about your educational commitments or love life?

America Ferrera: I personally was never very secretive about anything. I was always sort of wide open (laughs).

SheKnows: Being that secretive causes all kinds of trouble for her.

America Ferrera: That’s her weakness. I think that’s the conflict that comes between her and (her man) Marcus. Like “where is that woman that I know? That I’m in love with, that is strong and confident and knows what she wants?” All of a sudden nothing is more important than pleasing dad and being daddy’s little girl and that happens. There are those relationships in your life where they rule over all and you just please that relationship and ignore everything else.

Up next…America shares what her favorite wedding looks like and what it’s been like as a working Latina actress in Hollywood.