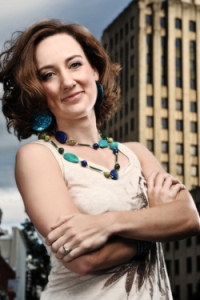 SheKnows: Congrats on your new book, tell us a bit about it

Bethany Maines: Bulletproof Mascara is an action/adventure tale for women, which means of course that it has a hunky love interest as well. The plot involves a young woman who takes a job with the make-up giant Carrie Mae; only to discover that the company is really running an all female espionage unit for the purposes of “helping women everywhere.”

SheKnows: Where did the idea for Bulletproof Mascara come from?

Bethany Maines: I used to get my make-up from a certain home sales cosmetic company and I was supposed to meet my sales rep at one of their meetings to pick up my make-up order. The “meeting” turned out to be a big recruiting drive and, of course, I couldn’t find my rep, so I was stuck listening to the speeches. And about half-way through I had the thought that the woman giving the speech reminded me of someone, only I couldn’t figure out who. Then it hit me. Frau Farbissina – the founder of the militant wing of the Salvation Army, from Austin Powers. They didn’t look alike, but they did have that same insane energy. Once I’d thought of the Frau it was only a split second later that I heard the little voice in the back of my head say “What if Mary Kay had a militant wing?” Sadly, I have a hard time resisting that voice. And thus Carrie Mae, international at home cosmetics sales giant and espionage organization, was born.

SheKnows: Nikki is 26 and looking for work but nothing is coming through, so she takes a job at what she thinks is a cosmetic company. Have you worked in cosmetics? what was the best job you’ve had and the worst?

Bethany Maines: I haven’t worked in cosmetics, but I admire those who do. Sadly, my inability to censor myself and genetic level sense of sarcasm makes working with the public for long periods of time inadvisable. The best job I ever had was as a bouncer for a teen club during my summers home from college. I was in charge of taking the money, and I worked with my brother, a cop, and two guys who’d gone to prison for holding up a drug dealer to pay their college tuition. I learned a lot from that crew. The worst job I ever had was working for a friend’s dad as a secretary for WOSSA – the Washington On-Site Sewage Association – which is a trade organization for people who install and maintain septic systems. My friend’s dad was super nice about it, but I’m not much of a secretary and I could not have been less interested in anything to do with septic systems. Eventually he ended up paying me to paint the office building and I got a great tan. It could have been worse.

SheKnows: What’s in your handbag?

Bethany Maines: Lipgloss, a powder compact, about 4 pens (I have a slight klepto problem with pens – they’re all MINE), a notebook, my wallet and my business card holder.

SheKnows: Must have beauty product? 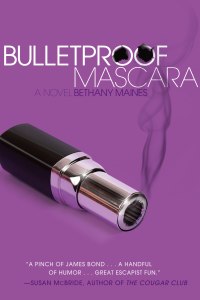 Bethany Maines: Moisturizer with sunscreen. Don’t leave home without it. No seriously. Moisturize and get plenty of sleep people; your skin will thank you.

SheKnows: What’s on your nightstand?

Bethany Maines: A stack of books including Terry Pratchett’s Going Postal, Jedediah Berry’s The Manual of Detection, and Charlie Huston’s The Mystic Arts of Erasing All Signs of Death.

SheKnows: If you could cast a movie of the book, who would play Nikki?

Bethany Maines: That’s a super tough one! I don’t have anyone picked out. Hopefully someone really athletic who could pull off stunts.

Bethany Maines: Oh no! I can’t pick just one and I already cheated on the movies! Top of the list is probably The Ordinary Princess by MM Kaye, but having to pick one is just cruel!

SheKnows: Nikki travels the globe with her job, where’s the best place you’ve ever traveled?

SheKnows: How did you become a writer?

Bethany Maines: I’ve written stories since I was a little kid, but I was inspired to pursue it seriously by my aunt Linda Nichols, who writes Christian fiction, and my college roommate Jennae, who was an English-Journalism major. Both women really encouraged me, and took my writing seriously, which really bolstered my confidence enough to pursue it as more than a personal entertainment.

SheKnows: When will the next book in the series be out?

Check out our five star review of Bulletproof Mascara
Join the SheKnows online book club!
The Opposite of Me review
Author Wendy Wax interview