Richard Gere stars in Hachi: A Dog’s Tale, a film for those who love dogs and great storytelling. The movie premiered on the Hallmark Channel September 26 and we have an exclusive online premiere — the first six minutes! Enjoy the preview and rush out to find the film, out now on DVD. 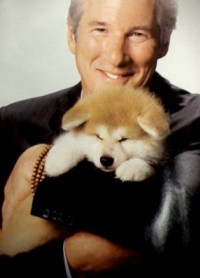 Gere is reunited with his Pretty Woman co-star, Jason Alexander, in Hachi. The dog in question is an Akita puppy that literally falls off of a train and then wanders freely.

Our online premiere showcases this scene, in which the adorable pup lands in the hands of Gere. Lucky dog…

The Amelia star portrays a university professor who seems to have all he wants in life. But the arrival of the Akita puppy makes him realize there is much more to seek.

An astounding bond develops between Gere and his puppy, and as anyone who has adopted an abandoned pet knows, the unconditional love all dogs have is only multiplied by the pet’s appreciation for a loving home. For the childless professor, the bond mimics that of a parent-child relationship.

Gere and his dog head out on a journey on which normal road trip rules do not apply. This is a life path exploration for man and his best friend.

Leading the charge on this journey is Gere as an actor who has found new depths of sensitivity in portraying a role that truly calls for it.

Hachi comes from a Japanese story — the tale of Hachiko, an Akita from the 1920s who is renowned for his loyalty.