In She’s Out of My League, an average guy in Pittsburgh meets the ideal woman. Although the story line sounds simple enough, the immense talent and copious improv scenes simply dazzle and interestingly enough, a lot of scenes take place at the airport where he works. 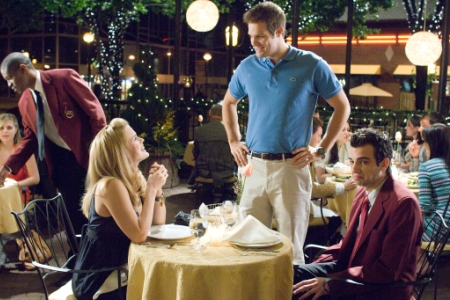 Kirk’s (Jay Baruchel) lack of confidence and mega-influence of his inner circle of friends start picking away at the relationship as they describe a perfect “10” and dating math. We caught up with the film’s stars, UK actress Alice Eve and Canada’s Baruchel, who dished to SheKnows about portraying strong characters, the use of butt doubles and their own airport horror stories.

Getting into My League

SheKnows: What drew you to this script?

Jay Baruchel: This was my chance to be a lamer version of him, but my version of Lloyd Dobler (Say Anything). I know the moments are a lot broader in this than they are in Say Anything. I was raised on John Hughes movies and Cameron Crowe’s first move, Say Anything and the movies of that era. What’s cool is I got to make this movie and do my Dobbler and I got to make The Trotsky where I got to be Ferris basically. It’s my way of putting my stamp on that style of movie.

SheKnows: What’s the key to playing this role? 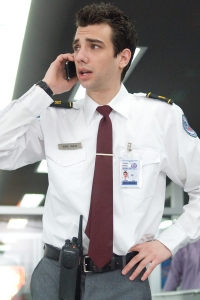 Jay Baruchel: The gig was kind of making him ideally, if I did my job, sympathetic. He’s at least moderately compelling and also, he’s not pathetic. It was important that it not be about a guy whose life sucks and then he meets a good looking girl and everything gets better. It was important to me that even if he never met her, he’d still be happy. He’s content with his life. He’s got good friends and a solid job and the exception of being heartbroken over his ex-girlfriend, everything’s going pretty well, she enhances his life. That was the key that he doesn’t come across as a doormat.

Sheknows: Now you’re the headliner, you’re on the poster. What does that feel like?

Jay Baruchel: Yeah, it’s weird. I keep getting asked that question and I’m psyched about it but it hasn’t been a huge paradigm shift as much as it seems. The workload at least I was groomed for. For the entire duration of my career in the States and for every big American movie I’ve done where I’ve been the supporting guy, I’ve gone back home to Canada and did independent movies where I’ve been the lead…when I started when I was twelve I did two TV shows back to back where I was the lead. It seemed like that’s what I was supposed to be doing.

SheKnows: What personality traits do you share with the character?

Jay Baruchel: There’s a chunk of myself in every part I play, there has to be or else I’ll suck at it. There was a chick who took me a fair bit of time to get over so I was heartbroken for a bit but I think I’m a lot crazier. He’s at least a functioning member of society (laughs).

SheKnows: In what ways are you crazier?

Jay Baruchel: Oh God, if you were to see the magazines I subscribe to… Cat Fancy, Soldier of Fortune, The Hockey News…

SheKnows: How much pressure is there in this role? There’s a certain amount of pressure to take the perfect girl role.

Alice Eve: I think Jay is playing down and we’re both playing roles. It’s acting. If it was a catwalk, then it would be different, but it’s a fantasyland and we’re both pretending. 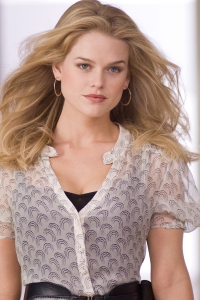 SheKnows: It’s interesting that your character isn’t just beautiful on the outside. She’s smart, she’s funny, she’s a good person.

Alice Eve: That’s what makes her the ten. She’s all the things that make a good person. For it to be taken away that she’s a perfect ten aesthetically would be missing the whole point of the movie.

SheKnows: How rare is it to see that in a script?

Alice Eve: Incredibly. The paradigm of this role is more of a male lead. She had the money, the power, the desire. She’s really nice and it’s very rare you get a nice girl in cinema without any faults or bitchiness or edge.

SheKnows: What was the camaraderie like on set? How much fun did you have?

Alice Eve: That much! It was high energy. They’re comedians as well as actors on the set so there’s a lot of sparring, a lot of competition between comedians and that would just up the ante and sometimes fall into complete hilarity.

Alice Eve: It was great. Jay’s very talented. He could obviously take on that physical comedy but when he got to doing the serious stuff, it’s like a game of tennis, acting. You’re only as good as your opponent. It’s very important that you have a good player opposite you. He is a wonderful player.

Alice Eve: I like first time directors. They have a fire and enthusiasm that is really refreshing, especially because he kept a very calm set. And it does come from the director, the energy on the set. 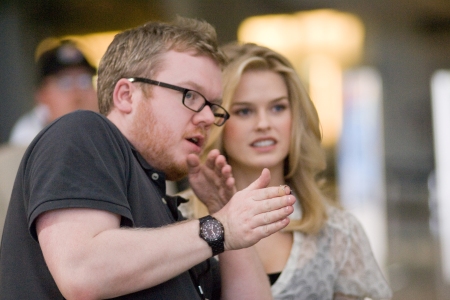 Jay Baruchel: It was awesome because of the background he has, the world he comes from, sketch comedy in England. Being a director and a performer, his mind is wired a certain way. He hears the rhythm. He knows where the jokes are. He made these two really wicked short films and what he nails in those movies is he has this great way of having these painfully awkward and funny moments which are compelling and emotional at the same time. His movies proved to me you can have a compelling emotional throughline and silly jokes to not be mutually exclusive. All of our awkward scenes would be irrelevant if the audience doesn’t care what’s happening.

SheKnows: And how about that butt double in the manscaping scene?

Jay Baruchel: I have a little sister and she and my mother live two blocks away from me. I don’t need my junk being out there for everyone to see. I was raised to air your dirty laundry in private. Had they really wanted me to be naked in it, they should have asked me when we were negotiating the contract…(laughs) I am convinced I can have a career I can be proud of without having once having been naked. No one’s holding their breath for that sequence.

Jay Baruchel: One time my mother and I went to visit my sister in Prince Edward Island and I made the mistake of eating a hot turkey sandwich before I could get on the plane…call me crazy, I didn’t think anyone could mess up a hot turkey sandwich but they managed to — as we were starting our final descent into Montreal that was when my body decided to throw it all up. The minute I got in the washroom, that’s when [I heard] the ding, “We have now started our final descent…” I was puking my guts out and the stewardess started banging on the door. I remember this moment, come on, get yourself together. The flight attendant literally did an “Oh God, Oh God.” Yeah, that was a horror story.