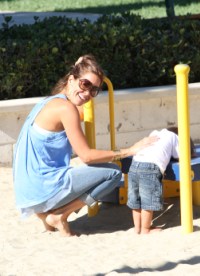 “She cleans up nice and she’ll be able to talk to the couples backstage with the perspective of having been through it, herself,” Dancing with the Stars co-host Tom Bergeron said today on Good Morning America. “I think it’s going to be a great show this year.”

Not only does Burke have experience shaking her booty on Dancing with the Stars, but she’s also no stranger to playing host. The former Playboy Playmate kept things going on the Rock Star: INXS and Rock Star: Supernova and actually got her start in TV as the host of E!’s Wild On.

The mommy of four also currently clocks in as “mommy correspondent” on The Doctors and hosts TV Land’s She’s Got the Look. She also has a slew of acting gigs under her belt, with stints on shows like Less than Perfect, Las Vegas, The Bernie Mac Show and Monk.

The recent battle to land the seat of Dancing with the Stars new co-hosting has gotten some chatter over recent weeks and word is, Burke beat out contenders Melissa Rycroft, Vanessa Minillo and former Spice Girl Mel B for her new gig.

Burke is currently on her way back from a family trip to Africa, with life partner David Charvet and the kids, but will be glammed up and ready to start her new job in time for the Monday, March 22 premiere of Dancing with the Stars.

Buzz Aldrin, Pamela Anderson, Erin Andrews, Shannen Doherty, Kate Gosselin, Evan Lysacek, Niecy Nash, Chad Ochocinco, Jake Pavelka, Nicole Scherzinger and Aiden Turner will take to the dance floor the two-hour event (8 to 10 pm), but there will be no eliminations. This episode is just a chance to let them strut their stuff!

The real competition begins the following Monday, March 29, in another two-hour show. The couple with the lowest combined judges’ scores and public votes for both performances will be sent home on the Results Show the next night, Tuesday, at 8 pm.

SheKnows sends out our congratulations to Brooke and can’t wait for the games to begin!