Sandra Bullock beat out Meryl Steep to take home the gold at the Academy Awards, but the Oscar winner is no diva. Bullock, Hollywood’s good-natured golden girl, was also on hand Saturday to accept her Razzie for Worst Actress! 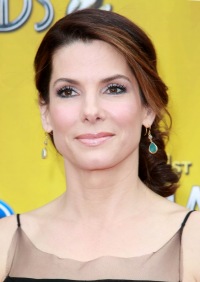 The Blind Side earned Bullock an Oscar and, along with The Proposal, played a part in making Bullock the box office queen of 2009, but All about Steve didn’t fare as well. The comedy she both produced and starred in took some serious hits and this weekend, it earned Bullock the nod for Worst Actress and Worst Screen Couple with Bradley Cooper from the Golden Raspberry Award Foundation.

Not only did Bullock show up to accept her Razzie with a smile, but she came bearing gifts!

“I think this is an extraordinary award,” she said on accepting the Razzie. “I didn’t realize that in Hollywood that all you have to do is say you’d show up and you’ll get it. If I’d have known that, I would have said I was appearing at the Oscars a long time ago.

“This is really wonderful, for the most important reason: Because they said no one wanted to go see this film, but I know there’s over 700 members here and if I won, that means the majority of the 700 have to have voted, so that means 352 went.”

Then, still smiling, Bullock revealed she suspected those who voted for her to win Worst Actress and for her and Bradley Cooper to take home Worst Screen Couple, couldn’t have actually see the film. 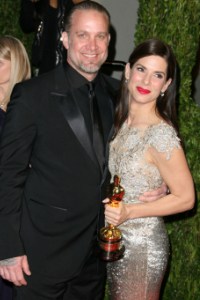 “I wouldn’t be here if you really, really watched it and understood what I was trying to say, so we have Team Bullock here, who’s not very happy with you guys,” she continued. “We brought everyone in the audience tonight a DVD of All about Steve. Everyone gets a copy and this is the deal I’m going to make with you… I will show up next year, if you promise to watch the movie — and I mean really watch it — and really consider if it was really and truly the worst performance. If you’re willing to watch it, then I will come back next year. I will give back the Razzie…

“If you had seen the film — seen it, with your eyes — it’s pretty much a film about a woman stalking a man. That doesn’t really set up the premise for a loving couple, so to give us the Worst Couple award is kind of a, Duh!”

She concluded with an offer to go through the script, line by line, for their approval of her delivery, unless they agreed to her terms and let her come back next year.

Cleary, Bullock was giving the audience some flack and didn’t quite agree with that she’s earned the award, but kudos to her for accepting both her weekend wins with such class and style – and in the case of the Razzie, a sense of humor, too! The only other actress to show up to accept in 30 years of Razzies was Halle Berry, who won for her astounding work in Catwoman.