Alice in Wonderland as seen through the 3-D looking glass of director Tim Burton, not only captures the heart and spirit of Lewis Carroll’s classic, but it is a rabbit hole unlike any other a filmmaker has created.

Burton’s visual marvel is hardly a surprise. The director has been producing stunning pieces of work since he first charmed audiences with Beetlejuice. 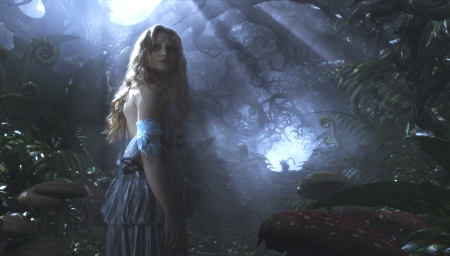 The 3-D effects never overtake the story, which honestly speaks more to Carroll’s timeless tale than any filmmaker’s gift. That being stated, Alice in Wonderland 3-D is a feast for the eyes. Sure, Avatar created a bar that very few 3-D films can achieve, but Alice in Wonderland utilizes its three-dimensional storytelling in a more minimal approach rather than sending axes towards audiences’ collective heads.

Alice (Mia Wasikowska in an astounding performance) in Burton’s Alice in Wonderland, is a young woman — who when confronted with a marriage proposal — runs away from an enormous Victorian English gathering only to fall into the fateful rabbit hole. Alice’s falling into Wonderland is a perfect example of how Burton utilizes the 3-D technology when it’s called for — rather than interrupting story flow with visual trickery. The viewer is literally falling with Alice, and falling, and falling — until she lands firmly in Burton’s wickedly wondrous Wonderland. 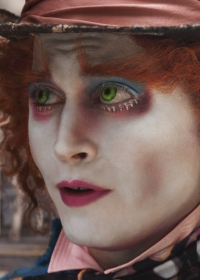 Burton’s Alice story hints at an older Alice that is returning to Wonderland. The beginning mystery surrounds whether she is the “right” Alice. The parallel, as brilliantly spaced out as the movie progresses, is a metaphor for all of us finding the way to our true selves.

Carroll’s cast of characters is first introduced through the White Rabbit, who seems to tease Alice throughout the aforementioned film-commencing engagement party. Once she falls down the hole, the White Rabbit is joined by Mad Hatter as played with perfect panache by Johnny Depp. It seems Wonderland, or as its correctly called Underland (brilliantly explained in the film!), has been overrun by The Red Queen who has banished the rightful royal, her sister The White Queen, from the throne and reeked havoc on the formerly peaceful land.

The Red Queen-White Queen sisterhood, as inhabited by Helena Bonham Carter and Anne Hathaway, respectively, are really two peas in a pod. Hathaway’s decision to paint her character in a somewhat darker light than simply the all-perfect White Queen was based on that exact fact. These are two sisters, sharing the same blood — The White Queen would hardly be a saint. In Burton’s Alice in Wonderland, Hathaway’s gamble works. 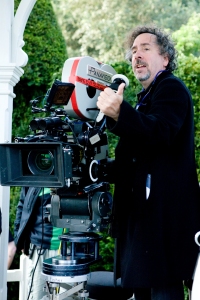 Mastering a task that is quite difficult is Michael Sheen (The Queen, New Moon) as the voice behind The White Rabbit. An actor of such powerful grace on screen completely looses himself in the furry paws of the iconic character. You know it’s Sheen going into the film, yet after the vocal performance coupled with the technical mastery that is the visualization of the White Rabbit, I needed to be reminded the actor voicing the character was Sheen. Cheers to Sheen for a fun frolic in Wonderland.

Depp and Burton have made an army of films together and upon hearing they were paired as director and Mad Hatter for Alice in Wonderland, it was as if the movie Gods had blessed audiences. Throw in Burton’s life partner Bonham Carter’s mesmerizing Red Queen, Matt Lucas’ tremendous double-duty as Tweedledee and Tweedledum and the world of Burton and Alice in Wonderland has never looked so vivid on screen, literally and figuratively.