It’s Oscars! On Hollywood’s biggest night of the year, let’s face it — the gowns sparkle as brightly as the stars who wear them. 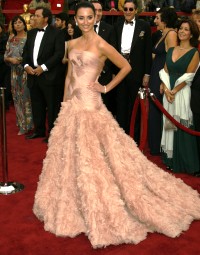 Although the next-day the water cooler buzz is typically, “Can you believe she actually wore that,” chances are the talk also includes discussions of the elegant, stunning and unforgettable top Oscar gowns.

Here’s a look at our favorite gowns of the recent past:

As Penelope Cruz walked the red carpet in 2007, she turned a lot of heads with this neutral colored gown full of pomp, circumstance and yes — feathers.

Since it’s so bold, not every star in Tinseltown could pull off the unique strapless gown.

But, Cruz wears it with flair and pinache.

Although Cruz would not take the Oscar stage to become an Academy Award-winner until the 2009 show, her golden touch with Oscar dresses has always been impeccable. 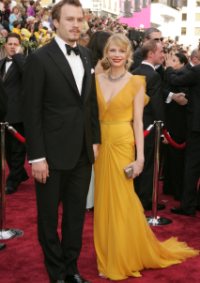 Considering not everyone can wear yellow, Michelle Williams gets props for wearing this Vera Wang dress in 2006.

Williams channels old school Hollywood glam with the fitted bottice and not to mention her perfect make-up, scarlet lipstick and all.

Plus, she had given birth to daughter Matilda three months prior to the Academy Awards.

Here she is with Matilda’s daddy, Heath Ledger at the 2006 Oscars where Ledger’s Brokeback Mountain was upset by Crash.