As Alec Baldwin and Steve Martin co-host the Oscars for the very first time, audiences are in for a real treat for on stage presenters. As much as we want to see which film will win the illustrious title of Best Picture, let’s be honest, it wouldn’t be the Super Bowl of award shows without the best and brightest of Hollywood having us seeing stars! 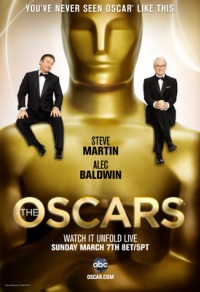 Since we now have an idea of who to see on stage, the question is who will be arriving with whom for the illustrious red carpet? Will Jen Aniston be Gerard Butler’s date? Will Brangelina arrive as the smooching happy couple given their recent public displays of affection? And how about newcomers to the party, Up in the Air’s Anna Kendrick and Vera Formiga in terms of red carpet jitters?

As the 82nd Academy Awards showcases the greatest achievements in cinema during the past year, PricewaterhouseCoopers has tabulated the Academy’s 6,000 members vote using secret ballots. In fact, the auditors are the only people who must maintain absolute confidentiality until the presenters say the ubiquitous words, “And the Oscar goes to…”

The Academy Awards will be broadcast live at 8:30 pm ET on ABC.