Naomi Campbell has denied that she assaulted a limo driver in New York. 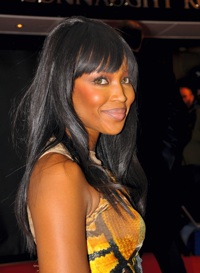 The supermodel, famous for her violent temper, was accused of hitting a chauffeur in the head from behind when the vehicle stopped short.

Miodrag Mejdina told police he had to pull over when Campbell hit him on the back of the head with her infamous cell phone (also used to assault a housekeeper a little while back), causing his head to hit the steering wheel.

But Mejdina later released a statement saying the whole thing was nothing more than a whacky mix-up!

“I got angry and overreacted,” he said. “It was a misunderstanding and I regret involving the police. This whole thing has been blown out of proportion and I apologize to Ms. Campbell for causing that to happen.”

No where in the statement does it actually say the assault did not happen. When asked if the driver was paid to make the story go away, Mejdina’s lawyer said, “The statement speaks for itself. We have no further comment.”

“I was accused of unacceptable behavior towards a driver in New York,” Campbell said.

“I have worked very hard on correcting my previous wrongdoings and I will not be held hostage to my past.”

“I try to treat everyone with respect and I am pleased the driver has apologized. I would like to put the last few days behind me and move on.”