Sheen has become known as one of Hollywood’s greatest imports in the last several years, with his star-making turn opposite Oscar-winner Helen Mirren in The Queen. Sheen followed his take on Tony Blair by inhabiting two contrasting roles — United football’s Brian Clough in The Damn United, another UK real-life individual — and Aro, the leader of the evil vampire empire, The Volturi, in the Stephenie Meyer Twilight Saga. 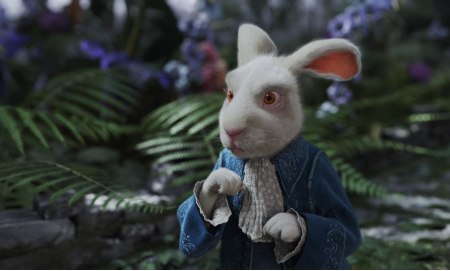 Lucas’ challenge filming Alice in Wonderland was playing two people at once — Tweedledee and Tweedledum. Lucas is a veteran actor and BAFTA winner for Little Britain, and finding himself in a green suit made him feel more pea than an award-winning actor. But, given this was a Burton film, Lucas said he would have done anything.

Although Lucas was digitally reproduced on screen as the anti-titanic twins of Lewis Carroll’s imagination, that face is all Matt Lucas. It is mesmerizing.

Add Burton behind the camera of the Carroll icon leading a stellar cast inhabiting the UK author’s Alice in Wonderland world with equal parts tribute, newly available 3-D technology and this is one rabbit hole movie fans must dive down.