Up until now, The Good Wife has centered on how Alicia’s husband’s real and alleged misdeeds have affected her and the kids, but with Peter now home, it looks like we’ll be seeing more Chris Noth action. 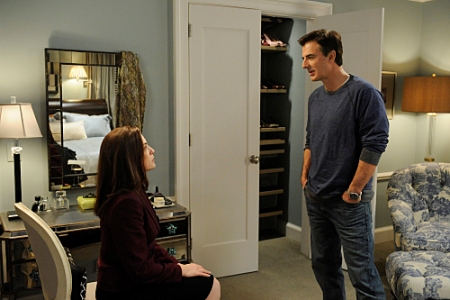 Having won his appeal, Peter finds himself on house arrest, living in a home where he may not be welcome.

No ankle bracelet or family drama is going to stop him from strategizing a political comeback, however. Sure, he’s guilty of hanging out with prostitutes, but politicians have survived worse. As long as he can clear his name of those corruption charges, he has a chance.

While Alicia grapples with the new situation at home, she and Diane wrestle with spousal privilege laws in a murder case. A win hinges on their ability to get a wife to testify against her husband, a situation Alicia is all too familiar with.

Christine Baranksi fans will enjoy seeing yet another side of Diane when hunky ballistics expert Kurt McVeigh (Gary Cole) catches her eye. Meanwhile, most of us are keeping a vigilant eye on the tension building between Alicia and her boss and old pal Will Gardner (Josh Charles).

If you’re one of the few who hasn’t been watching this show, this should be a doozy of an episode to get you started! We’ve also posted a clip that should get you set up and ready to dive in.

The brand new The Good Wife episode airs March 2 at 10 on CBS.

Read on for more The Good Wife