Julie Benz dishes Desperate Housewives, Dexter and why filming her Saturday Hallmark movie was a guilty pleasure. Uncorked took Benz to California’s wine country and the difficult task of filming on a vineyard. 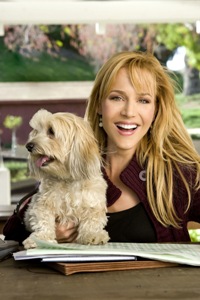 Julie Benz was a little surprised her character was killed off on Dexter. The hit Showtime show seemed a steady place for Benz as she entered her fifth season. This is a show about a serial killer, so considering, Benz’s run was quite long!

Benz, worried about her acting future, quickly picked up after her Dexter demise by landing on Desperate Housewives and has made a smash on Wisteria Lane already.

She is calling SheKnows exclusively currently to talk about all of the above, but also her new Hallmark movie Uncorked that airs March 6 at 9 pm on the Hallmark Channel and starring opposite Men in Trees favorite Scott Elrod.

Benz plays a young executive who heads to California wine country to attend a business conference.

SheKnows: What it was like starring across Scott (Elrod). I know he is quite easy to work with…

Julie Benz: He’s very easy to work with. You know, he’s very eager and such a good spirit. I don’t know if you’ve spoken to him ever, but he’s one of the nicest, kindest spirits and on set he loves what he does. He loves being an actor.

SheKnows: What most appealed to you, not just about this film, but the characteristics of your character itself? 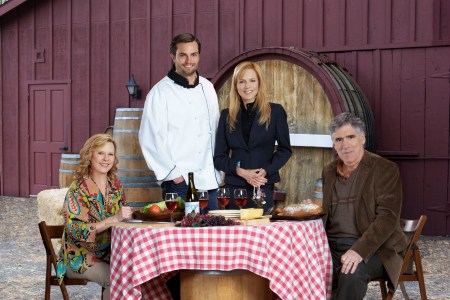 SheKnows: And having Uncorked be about wine, I suspect that was not a terrible aspect of filming this movie?

Julie Benz: Not at all! That was so much fun! We took over this hotel; the whole cast and crew, because we could only work so many hours because the sun would go down. It was around this time of year and we’d lose the light around four o’clock because of where we were situated in the valley there, and so we would start really early, but we’d be done about four or four-thirty. Then we’d all go out and have great dinners, and drink great wine! Then go back to work the next day!

SheKnows: So is it safe to say that even if you liked wine before, you have a new appreciation for it or an added appreciation?

Julie Benz: Definitely and it was fascinating to learn how they make wine and to see inside where the fermentation room is and to see the caskets. I loved the barrels that they aged the wine in! That was the most fascinating part for me.

SheKnows: And you, no stranger to the Hallmark movie, what is the experience about that iconic, pop-culture institution like for you?

Julie Benz: First of all, I know I’m making a movie that my whole family can sit down and watch. Which, if you know anything about my career, that’s not always the case with everything I’ve done (laughs). I enjoy doing work for Hallmark because my parents can sit down and watch it and not be uncomfortable, my grandparents and nephew, just something the whole family can enjoy is important to me. Also, one of the wonderful things I love about Hallmark is that they film their movies in California. There are very few companies that film TV movies in California anymore. They film them here, in town, and that’s awesome. 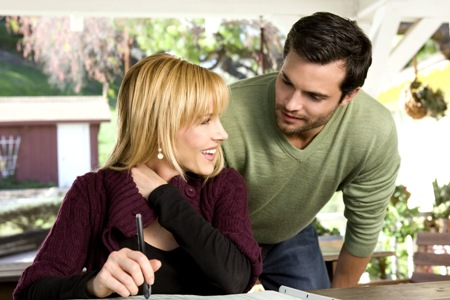 Benz: On Dexter and Desperate Housewives

SheKnows: Very true. I know one thing that a lot people were buzzing about was your turn on Dexter, what was the experience like on that set?

Julie Benz: Working on Dexter? It was a great experience. I mean, I spent five years there, since the pilot in that family. It was a wonderful experience. I obviously didn’t know I was being killed off; they really didn’t let me know until the very end. It was just kind of shocking, but after I got over the initial, “I just lost my job” reaction that I think everybody has, I was able to then look at it as this is really great storytelling and it really opens up the story for Dexter. And, you know, it is shocking, there’s really nobody else on the cast you could kill that would have as much of an impact as killing Rita. 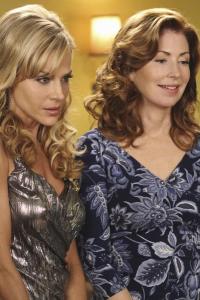 SheKnows: Now I hear you’re a multi-story arc on Desperate Housewives! Still some devious characters on that show, but maybe a bit safer, although you never know!

Julie Benz: They’ve killed 32 characters on that show! I said to my mother, who was like, “You’ve been killed,” and I said, “I’ve been killed off of a lot of shows; Dexter’s not my first murder.” I promised my mom I would get on a comedy, where they don’t kill people and then I get on Desperate Housewives — and they kill people! But, I don’t know if I’m going to live or die, I have no clue.

SheKnows: I was just going to say this nice little story about housewives, in a cute little suburb, and then I thought, wait, no. There’s plenty of murder and deviousness on that street!

Julie Benz: I send them a dozen every week!

SheKnows: You mentioned Jo Beth Williams, and I absolutely adore her work, since the ’80s. What is it about her screen presence and also for you as a fellow actress that you’ve taken away from these three experiences?

Julie Benz: First, when you talk to her about the business and being a woman in the business, she’s really opened up to me and helped guide me and give me really wonderful advice, very sound, solid advice. She’s just a tremendous woman, in my opinion. She’s extremely talented, she’s a great mother, she’s an amazing wife, and she has a very solid marriage, a very long solid marriage, which for this industry is very rare. I admire her on so many levels. Working with her, she just has that quality about her, that “thing.” I can’t explain it, but it’s great working with her no matter what venue. You know, she’s played my mother on Dexter and we’ve had dramatic moments together, and there’s also the light-hearted romantic comedy, it’s always terrific with her. 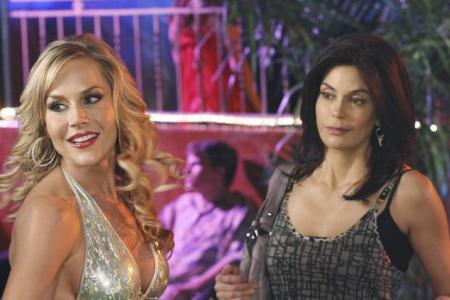